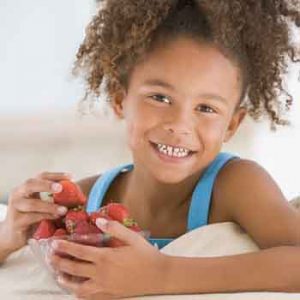 Kids love strawberries, but they can be laced with pesticides. [Photo: Bigstock]

Gooseberries, currants and strawberries are among the favourite fruits of children. Fresh oranges or grapefruit juice are seen as healthy. But according to EFSA’s report, more than 60% of these fruits contain residues of several pesticides, with 91.1% of gooseberries containing multiple residues.

While EFSA chose to emphasise that 97% of the food European consumers eat is ‘safe’ as residue levels are below the maximum residue limits (MRLs), a careful reading of the figures does not lead to the same conclusions.

» The most recent annual report on pesticide residues in food, from the European Food Safety Authority (EFSA), shows that half of all foods sampled contained residues form at least on pesticide and more than 60% of healthy fruits contain residues of several pesticides.

» While EFSA say levels are fall within ‘safe’ limits, campaigners argue that data on which ‘safe’ levels are calculated are inadequate.

» Worse, the evidence shows that year on year the proportion of food that contains residues from multiple pesticides is increasing.

» In particular the idea of ‘safe’ levels of pesticides fails to protect children who are uniquely vulnerable to pesticide exposures.

Nearly half our food

As much as 46.3% of the analysed food contained residue from at least one pesticide. EFSA stated that 43.4% of samples contained residues under the MRL – levels that the agency claims are safe.

But in a press release, Pesticide Action Network (PAN) Europe says it “does not agree with this statement” because the MRL is “theoretical, based on the knowledge of the moment. MRLs are regularly reduced because of the new findings in the toxicity of a pesticide.”

In addition, PAN points out, 61% of the contaminated foods contained more than one residue, and mixtures are not tested for safety: “There is currently no risk assessment of the toxicity of combined exposures: the risk assessment is carried out pesticide by pesticide, individually and not in combination. It is thus incorrect to classify this food as ‘safe’ for human health… the situation is getting worse year after year.”

In 2014 the percentage of European vegetables and fruit containing multiple residues increased to 28.3%.

In 2014 the percentage of vegetables and fruit in European shops without detectable pesticide residues decreased to 53.6%, close to the all-time low of 2007.

The report also found that meat often contains residues of persistent pesticides that were banned many years ago due to their toxicity to human health. Furthermore, the herbicide glyphosate is not often monitored, even in GM soybeans, which are known to contain high levels of the chemical. The failure to measure glyphosate is suspicious as it is one of the most widely used pesticides around the world.

Hans Muilerman, PAN Europe’s chemicals officer, says: “When we look at the way EFSA communicates these figures year after year, it gives the impression that its role is to ensure a feeling of protection for European consumers rather than to effectively protect EU citizens’ health. Ten years ago, EFSA was requested to assess the risk of exposure to multiple residues of pesticides. Nothing has been implemented up to now, despite evidence that the current method is not safe.”

Angeliki Lyssimachou, PAN Europe’s expert on endocrine disruptors, says: “Several pesticides are endocrine disruptors that we are exposed to in our daily lives. Pesticide-free food should be the norm to protect children or the unborn. MRLs are a theoretical concept, sometimes a political one, as it [the MRL for soy] was arbitrarily raised to import more GM soy to Europe. EFSA should not communicate on food being safe based on MRLs, but based on the absence of pesticide residues.”

Out of step with latest science

EFSA’s claims of safety are out of step with the latest science because they:

There is ample evidence that EFSA should take all of the above points into account – but it continues to ignore them. As a result, people continue to be exposed to mixtures that make their food a slow poison in adults and an acute poison in children. And people get sick, suffer and die unnecessarily early, because money is deemed to be more important than life.

Kids love strawberries, but they can be laced with pesticides. [Photo: Bigstock]