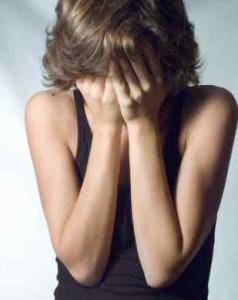 Panic attacks can strike anyone, but are more common in women

Suffering with panic attacks is one of the most common reasons given by people coming for a consultation to my natural health practice.

The people who come are both men and women and can be of any age. In some cases they have experienced either one or a ‘cluster’ of panic attacks some years previously, which have subsided and then returned, in others they are a new and very frightening experience.

The symptoms can include palpitations, cold sweat, faintness or dizziness, buzzing in the head, pains in the chest or elsewhere and a feeling of intense anxiety. Understandably, the first attack is often mistaken for a heart attack, or some other physical health crisis.

For some people the panic attacks are situation specific, such as on the tube, or in the office. For others they can happen anywhere. Most people will recognise upon investigation that the attacks start off during or just after a period of particular stress in their life, although in some cases once a panic attack is experienced a negative pattern of recurrence can become established.

The treatment will usually include some kind of emergency relief to take in the event of another panic attack occurring, and remedies to help support the nervous system and prevent them from happening again. Recurring panic attack  really benefit from deeper exploration, such as through counselling or psychotherapy.

The good news is that most people suffering with panic attacks do find that treatment with natural remedies does resolve the problem.

Firstly, here are some remedies to bring relief during a panic attack.

The Bach Flower combination called SOS or Five Flower Remedy is very useful to take at the first signs of a panic attack to help calm you down, and may prevent one from developing if taken quickly enough.

Alternatively, the homoeopathic remedy aconite is very useful for feelings of intense terror and the feeling that you are going to die.

Lavender essential oil can be inhaled to relieve a panic attack – if you are prone to panic attacks try keeping a cotton handkerchief infused with some lavender in a resealable plastic bag in your handbag. Lavender can also be applied in a massage oil or used in a burner to help you calm down after you get to your home or office.

There’s no one-size-fits all treatment to prevent attacks from recurring; most natural practitioners would take the individual circumstances into account to find the best remedy, but here are some remedies that may be tried.

An aromatherapist would give a massage using oils such as lavender, geranium and neroli and these may also be used in a bath oil.

The herbs of chamomile, lemon balm, vervain, skullcap and passiflora may be combined to take as an infusion to strengthen the nervous system and help prevent panic attacks; try drinking this combination as a tea three times a day.

Panic attacks can strike anyone, but are more common in women