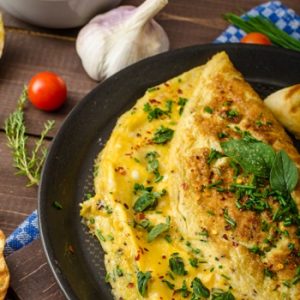 A high protein breakfast can help even out sugar highs and lows during the day and reduce cravings. [Photo: Bigstock]

Keto, low-carb, low glycemic index, Mediterranean, DASH diet, low-fat: there are a dizzying array of diets claiming to optimize health. Some are based on sound science and some are not.

For anyone living with type-2 diabetes, a disease that affects about one in 12 people globally, figuring out what to eat can be even more confusing because their bodies have difficulty processing sugars.

When they eat carbohydrates — the sugars and starches found in many foods — they get large spikes in blood sugar. Poor control of blood sugar by the body can damage organs, particularly blood vessels, eyes and kidneys.

The goal of my research lab at the University of British Columbia’s Okanagan campus is to research diet and exercise interventions for the treatment and prevention of type-2 diabetes. We conduct human studies testing how different lifestyle strategies impact blood glucose control and other health markers important for the management of this disease.

What does our science say about some of these fad diets? What are some simple strategies that those living with type-2 diabetes can use to cut through the hype and improve their health?

The first is probably the simplest and easiest to implement: restrict carbohydrate-containing foods, like oatmeal and toast, at breakfast.

I have been using continuous glucose monitoring for 10 years to study how diet and exercise influence blood sugar control. From studying hundreds of individuals with type-2 diabetes, I can point to one consistency: breakfast leads to the biggest glucose spike of the day.

I always assumed this was due to the fact that typical Western breakfast foods, like cereal, toast, oatmeal and fruit, are high in carbohydrates.

However, it could also be that circadian rhythm — the internal clock that sets our 24-hour metabolism — is “reversed” in type 2 diabetes.

Instead of waking up and being most glucose tolerant and insulin sensitive early in the day, circadian rhythm is disrupted in those with type-2 diabetes — so that their bodies are even worse at handling carbohydrates in the morning. If they eat a typical breakfast they get a very pronounced glucose spike.

This led us to conduct our recent study, published in The American Journal of Clinical Nutrition, which asked the simple question: “What would happen to overall glucose control if people with type-2 diabetes avoided carbohydrates at breakfast?”

As predicted, we completely eliminated the large breakfast glucose spike by providing a low-carbohydrate breakfast consisting of an egg, cheese and spinach omelette.

Not only that, blood sugar spikes after lunch and dinner were the exact same regardless of the breakfast. So overall exposure to damaging glucose spikes was improved and markers of glucose volatility were better with the simple switch to a very low-carbohydrate breakfast.

We also discovered that both pre-meal hunger and desire to eat sweet foods were lower at dinner on the low-carbohydrate breakfast day.

This suggests that eating a low-carbohydrate breakfast could reduce energy intake and help curb cravings for treats later in the day. A simple and powerful strategy not just for those with type-2 diabetes, but for anyone looking to improve their diet.

It should be noted that encouraging findings are preliminary and we don’t know if all low-carbohydrate breakfast foods would lead to the same effects.

You might also be asking yourself, if breakfast glucose spikes are such a problem, then why didn’t you ask participants just to skip breakfast? We know from previous research that skipping breakfast is probably not the greatest idea for someone with type-2 diabetes because it leads to exaggerated glucose spikes at lunch and dinner, and may lead to metabolic compensation — so that people eat more, or expend less energy, later in the day.

The second strategy for those with type-2 diabetes in particular, is to follow a low-carbohydrate or ketogenic diet.

Evidence for the benefits of a keto diet for type 2 diabetes are accumulating, with studies showing that with the proper support and medical guidance, over 50% of patients might be able to get their condition into “remission.”

That means their blood glucose control is back to normal and they do not have to take glucose-lowering medications anymore. It’s an astounding and life-changing result for the many people who have become dependent on daily medications like insulin or metformin.

In the real-world though, adherence to any restrictive dietary patterns is generally poor. Some people can stick to it, but usually at least half of participants fall off the wagon within six to 12 months of starting any new diet, whether low-carb or not.

One or two low-carb meals

There may also be some risks to a hardened ketogenic diet approach. One recent study from my lab also warns that the occasional “cheat day” when on a strict ketogenic diet might cause damage to blood vessels.

Switching just one or two meals per day to low-carb could be an attainable goal that maximizes the benefits while also minimizing the potential risks for many individuals with type-2 diabetes.

In an age when pharmaceuticals are the norm for managing most diseases, I’m encouraged to be discovering some simple alternatives that can be tested in scientific research studies. It’s not every day that we in the health fields see diseases seemingly reverse in our patients.

Because normal circadian rhythm dictates that humans are most tolerant to glucose in the morning, this strategy might not optimal for someone without diabetes. However, the lower feelings of hunger later in the day, when a low-carbohydrate breakfast is consumed, might be attractive for lots of people who are trying to control their weight.

We hope to test out some of these ideas in the coming years as we continue our research on optimizing lifestyle approaches for type-2 diabetes.

A high protein breakfast can help even out sugar highs and lows during the day and reduce cravings. [Photo: Bigstock]