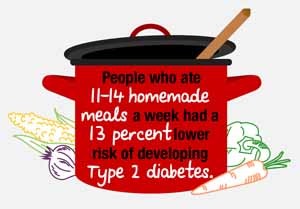 Eating a higher percentage of home-made meals can significantly lower your risk of developing type-2 diabetes.

Natural Health News — If you eat more meals prepared at home, you may significantly reduce your risk of developing type-2 diabetes.

According to recent research, presented at the American Heart Association’s Scientific Sessions 2015, people who ate around 11-14 home made meals a week had a 13% lower risk of developing type-2 diabetes compared to those who ate less than 6 homemade lunches or dinners a week. Type-2 diabetes is a major risk factor for heart disease.

The researchers analysed data from nearly 58,000 women in the Nurses’ Health Study and more than 41,000 men in the Health Professionals Follow-up Study and followed for up to 36 years (1986-2012). They focused on lunch and dinner meals because the original data-set didn’t have enough information to include breakfast patterns as well.

» The trend of eating out and eating more pre-prepared meals is increasing in the US and other developed nations.

» Alongside this trend is a rising rate of type-2 diabetes – which is a major risk for heart disease and other health problems.

» New evidence suggests that if around half your weekly meals are home-prepared it could lower your risk of developing type-2 diabetes by 13%.

None of the participants had diabetes, cardiovascular disease or cancer at the beginning of the study.

“The trend for eating commercially prepared meals in restaurants or as take-out in the United States has increased significantly over the last 50 years,” said lead researchers Geng Zong, PhD, a research fellow at Harvard T.H. Chan School of Public Health in Boston, Massachusetts. “At the same time, type-2 diabetes rates have also increased.”

Accumulating studies have suggested that eating out, especially in fast food chain restaurants, is associated with lower diet quality and higher body weight in children and young adults.

In the current study, the researchers also demonstrated that eating homemade meals was associated with less weight gain over eight years in these middle-aged and older health professionals. Overweight and obesity are risk factors for cardiovascular disease and type-2 diabetes.

While the optimum number of homemade meals people should eat each week is still elusive, Zong says a good rule of thumb is “more could be better.”

Eating a higher percentage of home-made meals can significantly lower your risk of developing type-2 diabetes.