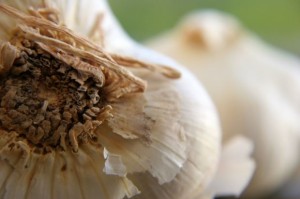 Modern science has confirmed many of the traditional medicinal uses for garlic [Image: hotblack - Morgue File]

Garlic – one of our most valuable medicinal herbs

No other herb has served as many culinary and medicinal roles in as many cultures as garlic.

Garlic, a member of the lily family, is purported to be useful for so many different conditions that modern herbalists believe that if garlic had been synthesised in the lab by modern scientists it would be one of the most effective  (and expensive) drugs in the world today.

As it is, the benefits of garlic are freely (and relatively inexpensively) available to anyone, either through including the fresh bulb in their diet or through daily supplementation.

More than 2,000 papers on the various aspects of garlic’s chemistry, pharmacology, and clinical applications have been published in the past 30 years.

These show that garlic (Allium sativum L) is rich in antioxidant phytochemicals that include organosulphur compounds as well as flavonoids, both capable of scavenging tissue damaging free radicals.

Recently published research shows that garlic can still surprise us. South Korean scientists have revealed that sprouting garlic bulbs – the ones many of us toss away without using – contain even higher levels of protective phytochemicals than ‘fresh’ ones.

Although the mechanisms of all garlic’s components are not known, many of its purported cardiovascular-protective effects as well as its anti-inflammatory, anti-cancer and anti-ageing effects are believed to be due to its antioxidant componenets.

Scientific interest has focused enthusiastically on the potential and use of garlic for the prevention and control of cardiovascular disease.

Garlic is an effective blood thinner and can significantly increase clotting time. In one study just 800 mg of garlic powder per day over 4 weeks led to a significant reduction in blood clots, this in turn reduces the risk of ischaemic stroke, which accounts for 87% of all stroke cases and results from an obstruction within a blood vessel supplying blood to the brain.

Many studies have found that garlic to be superior to placebo treatments. Research suggests it can lower total cholesterol by around 8%. In one review about garlic, taking the equivalent of ½ a clove of garlic daily could lower cholesterol levels by nearly 10%. These are clinically significant reductions that could reduce the risk of death from cardiovascular disease after the age of 50. It can also lower LDL (‘bad’ cholesterol) and triglycerides.

In addition, some studies found that garlic supplementation can raise levels of HDL (‘good’ cholesterol’).

In 2008, an analysis by Australian researchers found that garlic supplements reduced high blood pressure as much as prescriptions called beta blockers. Overall those taking a daily garlic supplement, with doses ranging from 600mg to 900mg, experienced significant reductions.

In a review in the journal Medical Hypothesis as far back as 1983 it was found to be effective against a broad spectrum of bugs including bacteria, viruses, worms and fungi, including candida.  It can also help to reduce catarrh in coughs, colds and sinusitis.

Garlic has also proven particularly effective against fungal infections such as candida and athlete’s foot.

Most recently researchers have found that diallyl sulphide, a compound in garlic is 100 times more effective than two popular antibiotics at fighting the Campylobacter bacterium, one of the most common causes of food poisoning.

Cancer prevention is another touted benefit of garlic consumption. However, research into garlic’s potential anti-tumour activities is mixed. It is probably fair to say that if garlic has any activity at all it is not as a cure but as a potential preventative for certain types of cancer.

Garlic’s sulphur compounds have anti-tumour activities. Recent analysis from China suggests that high consumption of garlic (and other allium-containing vegetables such as onions, shallots, leeks and chives) can reduce the risk of gastric cancer – though it is fair to say that garlic is not a cancer cure but more of a potential preventative.

Last year evidence showed that including it in your diet two or more times a week could reduce the risk of lung cancer by 44%.

The organosulphur components of aged garlic, for instance, have been found to block the action of carcinogens, and that they have the potential to prevent colon, oesophageal, lung, breast, prostate and stomach cancers – at least in the lab.

Human clinical trials are lacking, but an  evidence-based review by the US Agency for Health Research and Quality (AHRQ) that population studies show that people who regularly eat a lot of garlic have less risk of developing certain types of cancer – laryngeal, gastric, colorectal and endometrial – than those who eat little or no garlic. This has been borne out by other observational studies and meta- analyses.

For example, in one Chinese study of a population with a high incidence of stomach cancer at those in the highest quarter of garlic consumption had 40% lower cancer risk than those in the lowest quarter.

Another study in Iowa in the US also looked at the diets of over 40,000 women and found those who consumed the most fresh garlic had the lowest risk of colon cancer. However, a Dutch study of over 120,000 men and woman found no relationship between the consumption of garlic supplements and the incidence of breast, colon, rectal or lung cancers which suggests that fresh garlic that provides the most effective protection.

Is allicin the magic ingredient?

The allicin yield quoted on many labels generally refers to the potential of the alliin in the product to convert into allicin in the presence of the enzyme alliinase. This yield can only be guaranteed at the point of manufacture as allicin degrades quickly. By the time it reaches the consumer it may be a very different product.

But the focus on the allicin content of garlic supplements may be disproportionate, since allicin is just one of the dozens of the herb’s active components. For example, ajoene (formed by the combining of allicin and diallyl disulfide) has also been shown to have anti-platelet and antibiotic activity.

A number of additional constituents including the 33 identified sulphur compounds, 17 amino acids, germanium, calcium, copper, iron, potassium, magnesium, selenium, zinc, vitamins A, B1, and C have been identified  and been shown to have healthful actions in the body.

Many of these sulphur-containing compounds – vinyldithiins, ajoenes and S-allyl cysteine – and other constituents are quickly absorbed from the digestive tract, then extensively and rapidly metabolised. With regular ingestion these can be detected in the blood and tissues.

Experts now believe that there is no single constituent of garlic that is the main active ingredient. Rather, the range of constituents in garlic act synergistically to produce a variety of health benefits. For this reason including fresh garlic in your diet, and where appropriate buying minimally processed supplements that retain as many of garlic’s health-giving constituents as possible, is probably the best choice.

You should be able to smell it

If you choose to buy garlic supplements be aware that the effectiveness of garlic preparations can be altered in several ways. Like all herbs, the taste and smell of garlic is a kind of in-your-mouth quality control. Without them you are likely to be ingesting an inferior product.

Odourless garlic preparations are usually cooked – a process that inactivates alliinase, the enzyme that breaks down alliin and helps to form allicin. Another way of making garlic “odourless” is by adding an odour-masking compound, for instance chlorophyll, to the preparation. However these additions are rarely effective.

A less drastic measure is to make the tablet odour-controlled. Odour-controlled garlic is usually coated with a pharmaceutical glaze or put in a sturdy capsule to make sure the garlic is released in the gut where it is unlikely to produce garlic breath or reflux. Such coatings also ensure that the sulphur compounds in garlic preparations remain active until they reach the gut.

Garlic is generally non-toxic. A dose of around 200mg daily – the equivalent of around 70 cloves – has no known toxic side effects, though ‘overdosing on fresh garlic is likely to produce nausea without much in the way of extra benefits. The German E Commission recommends that a healthful dose, unless otherwise prescribed is 4 g fresh garlic – or one medium clove – or the equivalent in supplements.

These small considerations aside garlic used properly and for the right indications can still claim to be one of our most valuable herbs.

Modern science has confirmed many of the traditional medicinal uses for garlic [Image: hotblack - Morgue File]