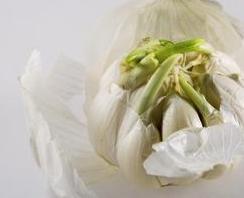 Natural Health News — Old garlic bulbs that have started to grow ‘sprouts’ are often considered past their prime, and usually end up in the rubbish. But new research suggests these bulbs have higher levels of heart-healthy antioxidants than their pristine counterparts.

Jong-Sang Kim and colleagues from Kyungpook National University in South Korea note that eating garlic or taking garlic supplements has been shown to be a natural way to reduce cholesterol levels, blood pressure and heart disease risk. It even may boost the immune system and help fight cancer.

But those benefits are generally for fresh, raw garlic or garlic supplements. Sprouted garlic has received much less attention.

Other studies have shown that sprouted beans and grains have increased antioxidant activity, so the team set out to see if the same is true for garlic.

When seedlings grow into green plants, they make many new compounds, including those that protect the young plant against pathogens.

In their study, published in the Journal of Agricultural and Food Chemistry, Kim’s group found that garlic sprouted for five days had higher antioxidant activity than fresher, younger bulbs, adding that several different metabolites that were present suggest that it also makes different substances.

Specifically they found that sprouting enhanced the free radical scavenging activity or the garlic and its ORAC value – a way of measuring the antioxidant capacity of a food (see more on ORAC values here).

Increased protection for the brain

Glutamate, one of the most abundant chemical messengers in the brain, plays a role in many vital brain functions, such as learning and memory. When glutamate levels get too high they can begin to generate free radicals that damage brain cells

According to Kim and colleagues it is not yet clear which components in sprouted garlic could be primarily responsible for the increased antioxidant capacity.

However they also found that that sprouting did not increase the total phenolic content of garlic, suggesting that phenolics are not associated with the increased antioxidant activity and neuroprotective effect of the sprouted garlic extract.

They conclude: “Therefore, sprouting may be a useful way to improve the antioxidant potential of garlic”.