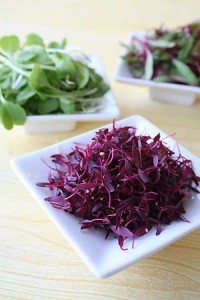 Get sprouting! Microgreens are bursting with nutrition

Natural Health News — Don’t let their size fool you – microgreens pack a big punch when it comes to nutrition.

Microgreens are young seedlings of edible vegetables and herbs harvested less than 14 days after germination. They have gained popularity in recent years because, although small in size, they can provide surprisingly intense flavours, vivid colours, and crisp textures and can be served as an edible garnish or a new salad ingredient.

Now scientists have caught up with what nutritionists have been saying for years. Microgreens are very, very good for you.

The results are published in the Journal of Agricultural and Food Chemistry.

Among the microgreens analysed, scientists found that the seedlings of red cabbage, cilantro, red garnet amaranth (a purple-hued plant) and green daikon radish had the highest concentrations of nutrients like ascorbic acids, carotenoids, phylloquinone or vitamin K, and tocopherols or vitamin E, all of which have antioxidant properties.

Cilantro microgreens were richest in terms of lutein and beta-carotene.

Researchers say they were astonished by the results.

“When we first got the results we had to rush to double and triple check them.” says study author Qin Wang, PhD, assistant professor at the University of Maryland in College Park.

Co-author researcher Gene Lester, PhD, of the US Department of Agriculture (USDA) added: “All of these nutrients are extremely important for skin, eyes and fighting cancer and have all sorts of benefits associated with them,”

“Because microgreens are harvested right after germination, all the nutrients they need to grow are there,” adds Wang. “If they are harvested at the right time they are very concentrated with nutrients, and the flavour and texture is also good.”

The findings are not universal. Popcorn shoots and golden pea tendrils were relatively low in vitamins and carotenoids, although they were still comparable nutritionally to some commonly consumed mature vegetables. The researchers also noted that golden pea tendrils, which are grown in the absence of light, perhaps not surprisingly, possessed much lower vitamin and carotenoid concentrations than pea tendrils grown under light.

A little goes a long way

Experts say the flavour of microgreens is also more intense, so a little goes a long way to enhance a meal.

Today, they are available at many farmers markets and grocery stores. But, of course, they are generally easy to grow yourself on a sunny windowsill or balcony meaning that even city dwellers can provide superior nutrition for their tables year round.

Microgreens are best eaten raw as cooking them can greatly reduce or even destroy their beneficial nutrients.