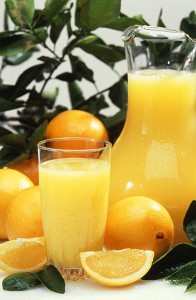 If it's a choice between a fresh orange and orange juice - choose the orange! [Image: USDA/Scott Bauer - Wikimedia Commons]

‘Healthy’ fruit juice may not be so
healthy after all

Natural Health News — A glass of ‘healthy’ fruit juice contains so much sugar it actually increases the risk of certain cancers, according to Australian research.

The researchers had sought to establish how effective different fruits, vegetables and juices were at preventing the development of bowel cancer. They examined the diets of 2,200 adults, who filled in a questionnaire detailing their daily eating habits. The team then tracked the participants for two years to see how their health progressed.

There was little surprise in the finding that eating apples, sprouts, cauliflower or broccoli on a daily basis all reduced the likelihood of developing the disease. What was unexpected, however, was that those who consumed lots of fruit juice had a higher risk.

For years, Department of Health and healthy eating guidelines have advised the public to eat five portions of fruit and vegetables a day, and fruit juice has widely been accepted as a reasonable equivalent of a portion of fresh fruit.

But say the scientists, by the time the drink has been processed and packaged, many of the factor found in fruit which help protect against bowel cancer – including fibre, vitamin C and antioxidants – have been lost.

The research, published in the Journal of the American Dietetic Association, looked at the development of cancer at three sites along the bowel – the proximal colon, the distal colon and the rectum. It found that those drinking more than three glasses a day had a 74% higher risk of developing rectal cancer. It was also associated with smaller increased risk at the other two sites.

Scientists suggest it is the high sugar content in juice may trigger certain tumours.

This is not the first time that consumption of fruit juice has been found to be inferior to fresh fruit and vegetables (see review here).

Nor is it the first time that it has been linked to disease. In 2008 a very large US study published in the journal Diabetes Care found that whilst increasing daily fruit and vegetable intake did not increase diabetes risk, increasing daily fruit juice intake did. Overall three servings of fruit juice per day was associated with an 18% increased risk of developing diabetes.

Drinking one or more cups of orange juice per day increased the risk of developing diabetes by about 24% compared with drinking less than one cup a month.

To put this in perspective, the researchers noted that drinking carbonated beverages, such as colas (sugar-sweetened and low-calorie) and fruit punch increased the risk of diabetes between 4 and 11% with every increase in daily single servings. That means that, in this study, orange juice consumption was more unhealthy than cola consumption.

If it's a choice between a fresh orange and orange juice - choose the orange! [Image: USDA/Scott Bauer - Wikimedia Commons]