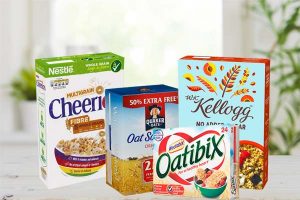 People who are concerned about what they eat will undoubtedly be aware of the recent US report detailing worryingly high levels of glyphosate in a variety of children’s foods.

The laboratory analysis, conducted by the Environmental Working Group, was the latest expose into how contaminated our food chain has become. It included both organic and conventional cereals and results showed that 43 out of 45 oat-based cereals marketed to US children were contaminated with glyphosate.

EWG’s findings echoed those of independent testing in 2016, commissioned by the advocacy group Food Democracy Now!.

A report on the study in the UK’s Guardian newspaper reassured readers that “There was no indication that the claims [in the EWG report] related to products sold outside the US.”

But this month testing, commissioned by the Coalition for Action on Toxics in Canada, revealed traces of glyphosate in popular Canadian foods such as Cheerios, Tim Hortons Timbits and bagels, Catelli multigrain spaghetti and Fontaine Santé.

Clearly this is not an isolated problem. Nevertheless, here in the UK we tend to think of ourselves as shielded from such problems.

Unlike the US we don’t (yet) grow GMO crops, which have been responsible for the huge increase in glyphosate use in America. But our farmers do use glyphosate both as a weed killer and also a desiccant to dry crops out before harvest and its uses has increased exponentially in the last decade. Glyphosate is also used in parks and schools and on roadsides and streets.

Its use as a desiccant, however, means that glyphosate is increasingly sprayed on so-called healthy foods such wheat, oats, maize and barley but also soya, rapeseed, sunflower seeds and chick peas in countries throughout the world.

Many of these are staple British crops, so should we allow ourselves to be smug?

Concerned by the US findings, campaigner Dr Rosemary Mason in South Wales undertook her own test of oat cereals in the UK. Her goal was to see how the figures here might compare with the EWG ones for oat-based cereals.

Dr Mason is retired doctor with a background in editing medical manuscripts. She spent 10 years as Assistant Editor of Anaesthesia (MB, ChB, FRCA), the official journal of the Association of Anaesthetists of Great Britain and Ireland.

She sent samples of four oat-based cereals to the labs of Health Research Institute (HRI) in Fairfield Iowa, an accredited laboratory for glyphosate testing. HRI is involved in a variety of different types of glyphosate testing, in people and foods, and is the same lab that analysed the Ben & Jerry’s ice cream samples in the US and in the EU.

The cereals, purchased in South Wales, were:

Results showed that, of these, the highest total levels of glyphosate were found in the Quaker Oats (499.9 ng per g) and the lowest in Nestle Multigrain Cheerios (137.29 ng per g) which are produced using a mixture of oats, wheat, barley, corn and rice ingredients.

Typically in the EU pesticide residues are expressed as mg per kg; in the US they are expressed as parts per billion, with 1 ppb equalling 1 nanogram (ng) per gram. Thus the Quaker Oats contained 499ppb, a level in line with what was found in several of the oat-based cereals in the EWG survey.

It should be noted that these levels are considered safe by the UK and European authorities and that in all likelihood many oat cereals in the UK would have measurable levels of glyphosate in them.

The maximum permitted glyphosate residue level in European cereals varies by crop. For oats (as well as barley and sorghum) it is higher than for other cereals; currently 20mg per kg, or 20,000 ppb.

Although levels of glyphosate found in Dr Mason’s and other tests are lower than this, when considering the problem of glyphosate contamination, it is important to distinguish between the concentration in a single product sample, and how much a person would consume over a day, i.e. the concentration multiplied by the grams in a serving. The more you eat of a product, or a daily combination of contaminated products, the more residues you will be consuming.

In addition, according to Dr John Fagan, Director of HRI, these results are concerning because, “The levels consumed in a single daily helping of any one of these cereals, even the one with the lowest level of contamination, is sufficient to put the person’s glyphosate levels above the levels that cause fatty liver disease in rats (and likely in people).”

The dose linked to fatty liver disease in animals is tiny – 0.05 nanograms (ng) glyphosate per ml of water daily. The European Food Safety Authority’s ‘safe’ limit, according to Fagan, is 75,000 times higher than that dose (see the detailed explanation which accompanied the glyphosate testing on Ben & Jerry’s ice cream in 2017).

Included in the report from HRI were two US organic oat cereals to provide a useful comparison.

The US organic granola did have some glyphosate in it, but, says Fagan, “Even more concerning is the “organic” rolled oats that had the highest glyphosate levels of any product tested here. What this means is that, at least in the USA, organic integrity is less than perfect.”

The UK’s Expert Committee on Pesticide Residues in Food (PRiF) has not consistently monitored breakfast cereals (conventional or organic), however in 2016 it did monitor a few breakfast cereals and found glyphosate in these. Unfortunately the PRiF has not followed up on these findings since then.

This means that in the UK we have only an inconsistent picture of glyphosate residues in cereal-based products because of what the government chooses to sample. PRiF maintains that if there is a public demonstration of interest it will amend its sampling. So if citizens say they want glyphosate monitored more frequently then, if this claim is to be believed, the committee will do that.

Members of the public are frequently invited to take part in consultations run by the PRIF. You can also contact the PRIF at prif@hse.gov.uk.

When it comes to glyphosate in UK foods, there is much we don’t know.

What we do know, as Dr Mason points out is that, “Some UK farmers have been spraying Roundup on cereals pre-harvest at the suggestion of a scientist from Monsanto to desiccate crops since 1980. A research study in 2017 by the European Commission’s Joint Research Centre, the Dutch University of Wageningen and Rikilt laboratories, tested 317 EU soil samples of arable land. Denmark, the UK and Portugal are the worst in this spectrum, with the highest detection frequency.”

Glyphosate in the soil is related to the amount of glyphosate applied to crops and the findings of the above mentioned study were particularly concerning because they suggest that – unlike the official line – glyphosate does not breakdown quickly but instead persists in our soils. In addition, there is inconsistent monitoring of glyphosate in water in the UK.

“I was extremely alarmed at the results and parents should be warned,” said Dr Mason.

All of the UK cereals tested are cereals that we regularly feed to children – a group that is uniquely vulnerable to environmental poisons.

Children are uniquely vulnerable to environmental pollution, in part because their response to toxic exposures is often very different from that of adults. For example:

This is why in 2012 the American Academy of Pediatrics did warn that children should have as little exposure to pesticides as possible, and produced guidelines for doctors to help them understand the issue.

Doctors should be aware – and concerned – because studies of animals fed GM foods and/or glyphosate, show worrying health impacts including damage to vital organs like the liver and kidneys, damage to gut tissues and gut flora, immune system disruption, reproductive abnormalities and tumours.

In their book What’s Making Our Children Sick? Drs Michelle Perro and Vincanne Adams, give a wide ranging view of childhood illness in the US and its connection to industrial food and environmental factors like glyphosate. You can read an interview with the authors here and read an excerpt here.

For a summary of the UK experience Beyond GM has produced a useful leaflet Kids in the UK – A Picture of Health? (references and suggested reading for the leaflet are here).

While Dr Mason’s sample included only four cereals, the results provide a snapshot of at least part of what our children may be consuming on a daily basis.

Lawrence Woodward a Beyond GM director adds an extra caution that we have more than glyphosate to be concerned about. In the UK where glyphosate is found in oat-based products it is invariably accompanied by chlormequat which is banned for food and feed crops in the US but is allowed in the UK and EU.

Says Woodward, “Pesticide residues are usually found in combinations and in the case of breakfast cereals and bread products glyphosate is often found alongside residues of chlormequat, a cell growth inhibitor which poses some health risks related to developmental toxicity and reproduction. Regulators argue that these risks are ‘low to moderate’ but few, if any evaluations of glyphosate and chlormequat residues in combination have been carried out.”

Pat Thomas, editor of this site and also a Director at Beyond GM adds, “We need to know more and we also need to take into account the other ways that children are exposed to a cocktail of pesticides. For instance, in the latest report by the UK’s Pesticide Residues Committee, looking into pesticide residues in the school fruit and vegetable scheme – which incidentally does not monitor glyphosate – 87% of the produce samples contained some pesticide residues and 66% contained residues of more than one pesticide. In taking matters into her own hands Dr Mason has, hopefully, provoked a much needed and more wide-ranging discussion in the UK.”