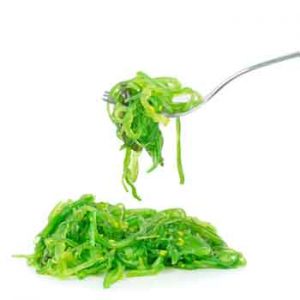 Nutrient-rich foods like seaweed may have helped the human brain evolve. [Photo: Bigstock]

Millions of years ago something happened that allowed the brains of early Homo sapiens to develop rapidly, well ahead of their closest relatives.

New research suggests that this huge leap was, in part, driven by the consumption of seaweed and its unique combination of essential nutrients.

Over the past 2.5 million years human brains have gone through significant development, and as a result modern-day humans are left with an organ that is the source of all the qualities that define humanity.

Our ancestors needed lots of energy-rich foods just to get by, and for this impressive, significant brain development they also needed certain essential nutrients.

Without nutrients like magnesium and zinc, modern brains cannot function, and according to a number of scientific studies it is likely that the access to certain essential nutrients influenced the evolution of the human brain so that it could become the brain we have today.

» Around 2.5 million years ago human brains began a period so unprecedented evolution and development.

» A new international analysis suggests that the consumption of nutrient and fatty acid rich seaweed may have played a part.

» A variety of edible seaweeds provide key nutrients for a hungry brain including polyunsaturated fatty acids, taurine, magnesium, zinc, iodine and B12.

From primitive ancestor to modern human

“Nutrients needed for this transition from a primitive ancestor to modern Homo sapiens were (and still are) available in seaweeds. Seaweeds could be found and harvested in abundance on shores, and for a foraging lifestyle, a rich coastal environment would be a significant source of a consistent supply of these nutrients,” says lead author Professor Ole G. Mouritsen, University of Southern Denmark.

Professor Mouritsen is an expert in molecular biophysics and author of several books about food science.

He is co-author of a newly published international review in Journal of Applied Phycology which looks at research into the potential impact of the consumption of a variety of seaweeds (so-called large marine algae, or macroalgae) in human brain health, including benefits to early Homo sapiens.

In their article the authors suggest that the human lineage is estimated to have diverged from our closest living relatives, the chimpanzees, around 5-7 million years ago.

“However, the changing patterns of resource distribution, associated with the extensive drying and expansion of the African savannahs between 2.5 and 2 million years ago have been the impetus for a shift in foraging behaviour among early members of the genus Homo. Foraging over longer distances for food would have contributed to bipedalism and a different body stature as increasingly larger ranges had to be traversed, and in the case of our primitive ancestors, this would undoubtedly lead to significant changes in diet,” the authors write.

Coastal areas may very well have attracted early hominoids in search of food.

“Our ancestors would find foods like fish, crustaceans, snails, seaweeds, bird eggs and perhaps occasional dead marine vertebrates. But they probably did not have the necessary rudimental understanding of seasonal tidal cycles and their influence on shellfish availability.

“Seaweeds of different types, on the other hand, can be found all across the intertidal zone from the high water mark to the subtidal regions and they could be readily and repeatedly harvested for food by all family members, including women and children,” the authors write.

Essential nutrients past and present

They note also that nutrients in seaweed were not just relevant for our ancestors: “Seaweed is just as healthy and nutritious for humans today as it was millions of years ago,” says Professor Mouritsen.

Taurine Can be found in red algae, marine fish, shellfish and meat of mammals. Is present in large amounts in the central nervous system and in the retina. The highest concentrations occur in the developing brain. Levels in adults are approximately one third of those of newborns.

Magnesium Can be found in legumes, pumpkin and squash seeds, nuts and macroalgae. It plays an important role in neuroprotection and cognition. Important for the ability to store new information in neural networks.

Zinc Can be found in many foods but is particularly plentiful in various cuts of meat, especially liver. Extremely abundant in oysters. Crustaceans and most seaweeds are also robust sources. Plays an important role in learning, development and memory.

Vitamin B12 Is found exclusively in animal products such as meat, eggs, fish and milk — with one exception: it is also confirmed in Pyropia species of seaweeds and it is quite likely in others that have yet to be adequately analysed. B12 is important for blood flow in the brain and cognitive functions like language.

Iodine Found abundantly in seaweed, especially in brown seaweeds. A necessary element for the synthesis of thyroid hormones, which are essential for central nervous system development.

Poly-unsaturated fatty-acids (PUFAs) The original sources of PUFAs are not, as often thought, fish and shellfish, but micro- and macroalgae like seaweed.

We can still enjoy the benefits of seaweeds today as culinary ingredients and as supplements. If you’d like to know more about the different varieties of edible seaweed and their nutritional properties, see our article Q&A: Super seaweeds.

Nutrient-rich foods like seaweed may have helped the human brain evolve. [Photo: Bigstock]