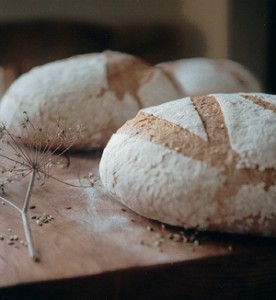 In praise of sourdough

This month has been designated Sourdough September by the UK’s Real Bread Campaign. It’s also Organic September. Uniting those two themes, Andrew Whitley founder of Bread Matters and a trustee of the Soil Association, explains what sourdough is, why it is so important for health and how to recognise the real thing.

Sourdough bread, that emblem of artisan baking, is going mainstream. Good news – or is it? When a previously niche product starts appearing in supermarket in-store bakeries, it’s natural to wonder whether it’s the real thing. But big companies’ propensity to cut corners and homogenise quality is made easier by the absence of any legal definition of sourdough, despite calls by the Real Bread Campaign.

Sourdough is a culture of yeasts and beneficial bacteria that occur naturally in bread flour and dough. The yeasts are more varied and less concentrated than baker’s yeast, so they raise the dough more slowly. The lactic acid bacteria (LAB) also require many hours of fermentation to work their wonders.

Real sourdough is incredibly simple, as befits a method that’s thousands of years old. You take some starter, refresh it with several times its own weight of fresh flour and water and let this ferment for some hours until the yeast population has grown. You use most of this dough to make bread by adding more flour, water and salt, and keep a little bit back as your starter for the next batch of bread.

(Don’t be put off by recipes that tell you to fuss over and ‘feed’ your starter regularly: we’re talking fermentation here, not pet-care. Established starters will keep undisturbed in the fridge for days, weeks or months between bakes.)

Time is crucial. If the sourdough is allowed to ferment slowly over several hours, it is able to transform the main ingredient – flour – in ways that together justify sourdough bread’s claim to be the best. Research done in the past fifteen years has revealed the multiple benefits of sourdough (1).

The list of benefits from sourdough seems pretty compelling even if we ignore the fact that bread-related metabolic complaints have proliferated just as the time taken to ferment most commercial bread has reduced. It’s this interplay of time and commercial advantage that should make us ask searching questions of some of the ‘sourdough’ breads now on offer.

Since there is no legal definition of sourdough, it is quite possible to give this name to a bread made with a dried sourdough powder or ‘pre-mix’ and raised quickly with baker’s yeast. Such bread may be shaped in a winsome ‘boule’. It may even have a hint of flavour. But it’s unlikely to deliver on any of the benefits listed above unless lactic acid bacteria have fermented the dough for several hours. It’s even possible that ‘sourdough’ is being used as an opportunistic descriptor of ordinary bread in the hope of selling more, rather as the label ‘organic’ would be used by unscrupulous greengrocers in the days before that trade was properly regulated.

Signs that your sourdough is real:

But the best way knowing that your sourdough is genuine is to make it yourself. And the really good news is that it’s easy to fit it into busy lives.

Here’s a BreadMatters recipe for Sourdough Country Bread to get you started.

15. Östman, E.M. et al, On the Effect of Lactic Acid on Blood Glucose and Insulin Responses to Cereal Products: Mechanistic Studies in Healthy Subjects and In Vitro. J Cereal Science, 2002; 36: 339-46.