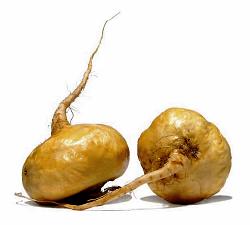 Maca root is traditionally used to increase vitality and fertility

Maca – a boost for energy, vitality and stamina

Maca (Lepidium meyenii) is an Andean plant of the brassica family.

It is an ancient crop, first cultivated some 2,000 years ago in the San Blas area of central Peru. The crop was grown in the grasslands of the Andean mountains on inhospitable terrain unsuitable for other forms of agriculture. Maca thrives in these hostile environments, only growing at altitudes above 3,500 metres on poor rocky soils. Today it is still grown exclusively in Peru.

The maca plan produces a root which resembles a large radish and it is this that is the basis of maca supplements and food powders. The root is also edible and can be baked or roasted, or used as the basis for soup. It is also used for making a fermented drink called maca chicha.

According to Tawantinsuyo legend, Incan warriors ate maca before going to war to increase their energy and vitality, but were prohibited from consuming it after conquering a city to protect the women from the strong aphrodisiac side-effects.

Maca was also fed to Spanish horses during the colonisation of the Americas in the 1500s to improve condition and promote breeding. The effects were so amazing that Maca was valued by the Conquistadors as highly as gold. Even now in agriculture, maca is used to increase fertility in livestock.

Today maca – which is sometimes called Peruvian ginseng – is still used to improve vitality and you may find it useful for the following conditions:

Energy, vitality and stamina As an adaptogen and nutrient-rich herb Maca can help reduce stress and increases vitality by supporting the adrenal glands, improving immunity and helping support the cardiovascular system. Maca has a high iron content which contributes to healthy circulation of well oxygenated blood around the body. It is also rich in B vitamins and magnesium and also contains iodine. It is also antioxidant rich, protecting cells from free radical damage and protecting the skin from premature ageing.

Hormone balance Maca’s adaptogenic properties also help stabilise and regulate hormone levels. It’s often recommended to alleviate symptoms of PMS and the menopause. Maca contains high levels of protein (10% of its dry weight) including 7 of the essential amino acids. This may account for its effects. Maca also has a high calcium content to help build healthy bones and teeth, particularly important during the menopause when bone density lessens.

Aphrodisiac Sexual dysfunction is a complex problem that affects both men and women form time to time. It can have a physiological origin but can also be affected by  mood, well-being, and the general level of happiness (or otherwise) that we experience in our personal relationships.

Preparation of maca root have been reported to improve sexual function in otherwise healthy people of both sexes. Maca contains prostaglandins – messenger molecules which act like hormones to mediate physiological effects within cells. Maca has been shown to be superior to placebo in improving erectile dysfunction. It can help increase sexual desire in men, but does not appear to affect testosterone levels or levels of other hormones in men including LH, FSH, prolactin, 17-OH progesterone or estradiol.

Other evidence suggests improvements in sexual function in menopausal women. One study done on women in 2008 concluded that “maca reduces psychological symptoms, including anxiety and depression, and lowers measures of sexual dysfunction in postmenopausal women independent of estrogenic and androgenic activity.” It has also been shown to improve SSRI induced sexual dysfunction and loss of desire in women.

Fertility Traditionally used in Peru for couples struggling to conceive, recent clinical trials have also suggested significant effects of maca for increasing sperm count and mobility. It contains phytoestrogens and phytosterols  which may account for the spermatogenic and fertility-enhancing activities, though studies have not show that it has a strong impact on hormone levels in either men or women. Very likely its benefits work through some other physiological system.

Other benefits Maca root isn’t generally reputed as being a herb that can help to control diabetes, but a 2007 animal study found that 2 weeks of maca supplementation to subjects fed a high sucrose diet ‘significantly improved glucose tolerance, and lowered levels of glucose in blood.’

The recommended daily dose of this superfood is just 6mg (1 tsp) daily. Remember that you should not use maca if you are pregnant or breast feeding, or if you have hypertension or are experiencing nervous excitability.

Maca root is traditionally used to increase vitality and fertility