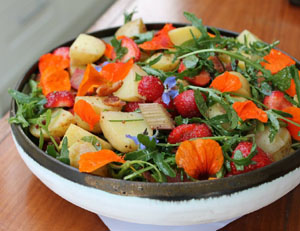 Move over Mediterranean – the Nordic diet is here

For most of us the Mediterranean diet is seen as the holy grail of healthy eating, but unless you live in sunny southern climes, it can be hard to replicate all of the elements of that diet in your daily routine.

It may be hard to imagine two places more different than sunny Spain (or Italy or Greece) and countries like Denmark, Sweden, Finland, Norway and Iceland. But if we focus less on the differences in taste between say oregano and horseradish and more on the health benefits of individual foods the similarities become clearer,

People in Nordic countries are as prone to eating junk as the rest of us, but the assumption that the traditional diets in Northern Europe are based mostly around sugar,  high-fat dairy products, and red meat and low intakes of fruits and vegetables is misleading.

In recent years Nordic chefs, including Claus Meyer, co-founder of the award-winning Copenhagen restaurant Noma have got together with academics and government bodies to promote what is known as the New Nordic diet which emphasises the best of traditional Nordic foods.

But while restaurants like Noma focus on cuisine, the foodie equivalent of haute couture – i.e. improbably constructed plates of things like edible soil (made from malt and hazelnuts), oyster porridge, veal and blackcurrant cookies, seabuckthorn leather with pickled elderflower and chicken skin sandwich with lumpfish roe – passionate promoters of Nordic food like Mia Irene Kirstensen, are on a mission to show that the foods that underpin healthy Nordic cooking can be a part of any home meal.

Kristensen wants to make the new Nordic diet and the principles behind it – including using fresh, local, seasonal and even foraged ingredients, reinvigorating traditional methods of preserving to make seasonal ingredients last longer, thinking beyond wheat when we think of grains –  public property and runs cooking courses in her native Denmark as well as in London with a friend of this site Anna Colquhoun, The Culinary Anthropologist (see Anna’s lacto-fermented cucumber recipe here).

A healthy way of eating

These traditional Nordic foods have well known health benefits as more and more studies are showing.

For example, in a randomised, controlled trial in the Journal of Internal Medicine in 2011 involving Swedish men and women with moderately raised cholesterol compared the effects of usual Swedish eating habits to this healthy Nordic diet.  Results showed a 6% drop in systolic blood pressure,  9% drop in insulin levels, a 21% drop in LDL (‘unhealthy’) cholesterol and a 4% drop in weight.

In another 2011 study in the Journal of Nutrition researchers follower more than 50,000 Danish men and women ages 50 to 64 for about 12 years. The men’s diets were rated on a points system with one point each awarded for above average consumption of these six healthy foods, common to the Nordic diet:

Most recently in 2013 a study has found that a healthy diet, based on Nordic ingredients, improves cholesterol values and reduces the risk of coronary heart disease. A healthy diet will also reduce the level of inflammation factors linked to metabolic syndrome.

The study again published in the Journal of Internal Medicine involved 166 people with impaired glucose metabolism but not overt diabetes. During the 18-24 weeks of the study, they either kept strictly to a healthy, Nordic diet or a conventional diet. The effects of the two types of diet were compared.

The amount of harmful lipid particles (fatty particles in the blood) was also reduced. In addition the diet also meant 1.5–2 times higher uptake of several important minerals and vitamins.

The reductions in cholesterol seen, say the researchers, could reduce the risk of coronary diseases by up to 10–15% over a period of 5–10 years.

Another effect of the Nordic diet in this study was that the level of pro-inflammatory substance interleukin-1 receptor antagonist (IL-1Ra) was reduced by around 20% in people who kept to a healthy Nordic diet, compared with conventional diets.

IL-1Ra is a cytokine – a chemical messenger – that helps regulate immune responses, inflammatory reactions, and the production of blood cells. Higher levels of IL-Ra are believed to be an accurate indication of metabolic syndrome, which raises the risk of type-2 diabetes.  Higher IL-1Ra levels can also indicate a fatty liver.

By reducing inflammation response, say the researchers, a healthy Nordic diet can also reduce the body’s burden of oxidative stress.

In many respects the Nordic and Mediterranean diets are composed of similar elements.

If you are looking for a healthy diet it doesn’t have to be an either/or choice. Elements of one can be substituted for the other to provide variety and a change of pace. But for comparison’s sake here are the building blocks of each type of diet:

If you are intrigued you can find out more in the links to the left of this article. And here’s a recipe for Smoked Fish Chowder to get you started.