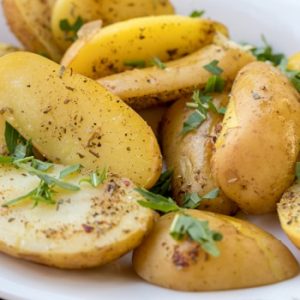 The potato has all the requirements to form part of a healthy balanced diet; so what has it done done to fall so far out of food favour? [Photo: Bigstock]

Potatoes are apparently far from being flavour of the month. Rejected by young people and “clean eaters”, sales are plummeting. But what has the potato done to deserve being treated so distastefully?

Reports claim that millennials prefer rice and noodles, and think that potatoes will make them fat. According to The Grocer magazine potato sales have decreased by 5.4% in the last four years, while sales of rice and noodles have risen by 30%.

But the potato has a proud history. One of the most common and versatile root vegetables, it was first cultivated by the Inca Indians in Peru over 7,000 years ago. Brought to Europe in the 16th century, potatoes have been associated with population surges and increased global urbanisation. There are now as many as 2,000 different varieties being grown in over 160 countries.

Yet today it seems we crave the quick and easy, avoiding anything that requires time or preparation. Potatoes are apparently seen as neither exotic, convenient or healthy.

So why did a once favoured food find itself pushed aside? Well let’s examine the evidence before it is judged guilty. In its defence the potato has all the requirements to form part of a healthy balanced diet.

In 100g of steamed potatoes, you’ll find just 100 calories, no fat, no sodium, no cholesterol, and no gluten. Instead, you’ll get nearly half your daily dose of vitamin C, more potassium than in a banana and plenty of vitamin B6, fibre, magnesium and antioxidants.

Yes, there is starch, which can increase insulin sensitivity – but it can also improve blood sugar control, digestive health, nutrient absorption and satiety (fullness), help curb inflammation in the body, boost immunity and improve blood circulation.

The case against potatoes often seems to rest on accusations of high calorific value. But it is not the actual potatoes which bring the calories, it is the method of cooking.

People often listen to the latest diet information and react by thinking that certain food groups are not good for you. In fact, a person requires foods from each nutrient group in order to maintain optimal health. Eating potatoes cooked appropriately in moderation is simply not harmful.

Potatoes are also classified as a high glycemic food, but if eaten as part of a diet which includes high fibre foods such as lentils, beans, nuts and other vegetables, the sugar spike can be counteracted.

A lot of the potato’s PR problem may simply be about portion control. It seems that once we start to eat a bowl of chips or crisps, we find it impossible to stop until they are gone, and all of their salty calories have been consumed. Boiled or baked potatoes on the other hand are very rarely eaten to excess.

When the chips are down

But with rises in obesity, we become obsessed with following the latest diet craze – where usually at least one of the main nutrient groups are significantly decreased or eliminated. As part of this, potatoes have become taboo.

In the 1970’s potatoes formed a staple part of the everyday diet. In the decades since, according to the National Obesity Forum, which compared the habits of 4,000 UK households from 1980 to 2012, eating habits and diets have been getting steadily worse.

This has been mainly due to the introduction of processed foods and ready meals and falls in line with the commencement of the obesity crisis in children. Another reason may be due to more exotic lifestyles. With foods from around the world more readily available, alongside the increasing number of takeaways, the potato has lost some favour. But in our desire to save time and money we may actually be forgetting a key aspect – our overall health and longevity?

Potatoes deserve to be given another chance. People need to consider the way that they have been cooking and consuming this wonderful vegetable. There is no reason to cast them aside. For a nutritious vegetable which will power up your performance – look no further than the humble spud.

The potato has all the requirements to form part of a healthy balanced diet; so what has it done done to fall so far out of food favour? [Photo: Bigstock]