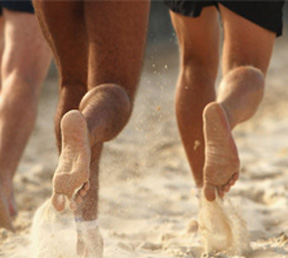 The human foot was described by Leonardo da Vinci as “a masterpiece of engineering and a work of art”.

With 26 bones and 33 different joints each, our feet are a miracle of biomechanical engineering. Today, because far too many people in modern society think that feet exist for the sole purpose of displaying footwear, these remarkable appendages often languish for hours on end in hot, dark, constrictive shoes.

Now as the Olympic deluge descends on London some interesting research has emerged on the disadvantages of wearing trainers in sport.

In a small study researchers at Northumbria University concluded that wearing trainers can significantly alter our natural gait and cause Olympic athletes to expend unnecessary energy whilst running.

The research team found that when those elite athletes who always wear shoes run barefoot they immediately alter their gait to that characteristic of habitual barefoot runners, and also use less oxygen during barefoot running compared to running with shoes at the same speed. Barefoot runners, say the researchers, tend to land on their toes (a forefoot strike) while wearing trainers encourages then to run on their heels (a rearfoot strike) – see here for more.

These are not the first studies to conclude this. In 2010 a study in Nature found that wearing sports shoes forced runners to land more often on their heels than if they were barefoot or wearing minimalist sports shoes and this can translate into more impact related injuries.

In the past, well-known international athletes have successfully competed barefoot, most notably Zola Budd-Pieterse from South Africa and the late Abebe Bikila of Ethiopia who won the Olympic marathon in Rome barefoot after finding that the Olympic shoe supplier, Adidas, had run out of shoes in his size.

British runner Bruce Tulloh also competed in many races during the 1960s while barefoot, and won the gold medal in the 1962 European Games 5,000 metre race.

The practice is also popular with non-professional athletes. One barefoot runner, Rick Roeber, has been running barefoot since 2003, and has run more than 50 marathons, 2 ultra-marathons of 40 miles, and over 17,000 miles (27,359 km) all barefoot.

Previous studies have found that populations who habitually run barefoot report a low prevalence of lower-limb injury, suggesting that being able to feel the nature of the terrain allows you to adjust the force your feet apply to the ground (known as plantar-sensory feedback) plays an important role in safe running.

The problem with shoes

There are other problems with shoes as well:

A full range of movement

While few professional runners compete shoeless these days, many train barefoot and some evidence exists to show that and toned, flexible muscles are less vulnerable to problems like Achilles tendonitis or plantar fascitis (heel pain).

Why does this matter, especially since so many shoe manufacturers are starting to make shoes that claim to mimic the barefoot experience?

Like the rest of the body, feet need exercise and the opportunity to experience a full range of motion. In common with hands, feet are also specialised instruments of touch. The nerve endings in the feet, when stimulated by stepping on something sharp or rough, cause reflex muscle contraction to avoid the irritation.

This constant cycle of sensory stimulation and reflex muscle contraction is thought to improve the strength of the foot and leg muscles.

A map of the body

Being barefoot – literally with both feet in contact with the ground – is a significant way of grounding ourselves emotionally, physically and psychically in our environment.

Ancient disciplines such Chinese and Indian medicines believe that the feet contain a ‘map’ of the body. There are over 7,000 nerve endings in the feet and these have interconnections through the spinal cord and brain with all areas of the body.

This is the basis of the practice of reflexology which uses specific pressure points on the feet to relieve problems elsewhere, including backache and abdominal pain. In ancient times we would have stimulated these reflexes naturally by walking barefoot over rocks, stones and rough ground or even rough hewn floors in our dwellings.

Today anybody interested in the benefits of bare feet might turn to reflexology shoes with dimpled insoles or reflexology mats that mimic the undulating uneven surfaces of cobblestones. Indeed cobblestone mats are recommended by some reflexologists for use at home.

Last year a study on the health benefits of “cobblestone-mat walking” published in the Journal of Aging and Physical Activity found that older adults experienced significant improvements in mental and physical well-being, including reductions in blood pressure and significantly reduced daytime sleepiness and pain from regularly walking barefoot on cobblestone mats. Cobblestone walking has also been shown to improve balance and lower blood pressure in older adults.

Why not just do it?

The fashion industry, of course, has been quick to jump on the barefoot bandwagon. In 2004 in one of the company’s largest spring marketing campaigns ever, Nike introduced the Nike Free a trainer that promotes a more natural physiological use of the feet during sport.

Adidas, Fila, Reebok and many others have introduced shoes that simulate natural running. Other examples include the Vibram FiveFingers, VivoBarefoot by Terra Plana. Like the notion of barefoot running itself, these ‘nature identical’ minimalist shoes have provoked endless debate and controversy; many runners have complained they led to injuries and problems. Some of this may be due to our expectations borne of the sales hype.

All serious runners are prone to injury – minimalist shoes are unlikely to completely prevent that and may simply shift the injury to other sites in the body. Then again almost barefoot isn’t the same as barefoot – this too may play a part as may too quick a transition from shod to barefoot running.

As if to underscore this point, in a paper in the August edition of the Journal of Strength And Conditioning, Carey Rothschild, an instructor of physical therapy at the University of Central Florida in Orlando, and a specialist in orthopaedic sports injuries, reviews the research and provides a guide for those who want to explore barefoot running as a way to train for marathons. It’s a 10-12 week program that slowly eases people who run in shoes onto their bare feet.

There are times when we need to or have to, wear shoes. But at the same time all this (sometimes very expensive!)  ‘just like barefoot’  footwear begs the questions if all these shoes are just like running barefoot, and if running barefoot is good for you, why not just find a suitable surface and just do it?

You don’t have to be an elite athlete or even to go running, to benefit from going barefoot. When the weather is right it’s a great way to reconnect with the earth, to exercise your feet and to (literally) kick off the cares of the working week. Why not give it a try?