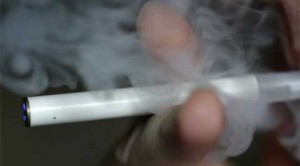 Q&A: Are e-cigarettes a healthier option?

Q — I’m seeing more and more ads for e-cigarettes. Are they safer to use than regular cigarettes?

A — E-cigarettes are battery-powered devices that heat a liquid nicotine solution commonly consisting of glycerin, nicotine and flavouring agents such as tobacco, menthol, coffee, candy, and fruit.  As the solution heats up the user inhales the nicotine vapour created and ingests the nicotine. Some e-cigarettes have been found to contain toxic chemicals such as such as diethylene glycol, a component of antifreeze that’s toxic to humans and is banned in food and drugs as well as the carcinogen nitrosamine.

E-cigarettes, which have been sold in the United States since 2007, and are marketed as an option to help smokers kick the habit – though there is scant evidence that they do this.

Use on the rise

As  a recent publication on the usage of electronic cigarettes by the anti-smoking group Action on Smoking and Health (ASH) shows their use is on the rise.

E-cigarettes are portrayed as sexy, fun devices for young adults and there is increasing evidence that e-cigarettes devices, which come in a variety of colours, are being marketed as a fashion accessory. They even have their own language – you don’t smoke you ‘vape’. One advertising tag line, for example, says: “Smoking is so last season”.

In the US a report from the group Legacy has shown that makers of electronic cigarettes target much of their advertising at young people, using many of the same tactics now banned for makers of traditional cigarettes, including sponsorship of youth-oriented events.

This is concerning, as such marketing could lead young people, especially young women, to take up the habit.

In the UK e-cigarette users have tripled to 2 million since 2012. There has been concern that the product may act as a “gateway device” – encouraging non-smokers into the world of nicotine addiction and potentially increasing their chances of trying tobacco smoking later on. However the ASH survey suggested that they are used mostly by current and ex smokers; there is little evidence that non-smokers are using e-cigarettes.

And while some people may think they’re not smoking when they ‘vape’, a survey of 151 life insurance underwriters in the US at a recent conference showed that nine in 10 considered e-cigarette users to be smokers.

Likewise, a recent survey of consumer attitudes in the US has shown, the belief that e-cigarettes are safer than traditional cigarettes is starting to diminish – with good reason.

So why do insurers consider the risk from e-cigarettes the same as smoking cigarettes?

Not much help for quitters

Given that they have been on the market for so long it’s amazing that we have only just seen the first major review of their safety. The study conducted by University of California at San Francisco scientists analysed 84 research studies on e-cigarettes and other related scientific materials. It found that industry claims about the devices are unsupported by the evidence to date, including claims that e-cigarettes help smokers quit.

The UCSF scientists found that e-cigarette use is associated with significantly lower odds of quitting cigarettes. They also found that while the data are still limited, e-cigarette emissions “are not merely ‘harmless water vapour,’ as is frequently claimed, and can be a source of indoor air pollution.

The long-term biological effects of use are still unknown, the authors said.

The study also tacked the issue of secondhand exposure. E-cigarettes, said the authors, do not burn or smoulder the way conventional cigarettes do, so they do not emit side-stream smoke. But bystanders are exposed to aerosol exhaled by the user. Toxins and nicotine have been measured in that aerosol, such as formaldehyde, acetaldehyde, acetic acid and other toxins emitted into the air, though at lower levels compared to conventional cigarette emissions.

In one of the reviewed studies scientists reproduced the atmosphere of a smoky bar. They found that biological markers of nicotine in the non-smokers who sat nearby were similar for both cigarette smoke and e-cigarette aerosol exposure. Short-term exposure studies of e-cigarette use show a negative impact on lung function and bystanders were found to absorb nicotine from passive exposure to e-cigarette aerosol.

Not safer for parents with kids

The bystander issue is important for parents with children, who may be using e-cigarettes as a ‘healthier’ alternative.

Scientists found that 13% of parents had tried electronic cigarettes, and 6% reported using the devices in the past 30 days. In addition, 45% of parents who had tried electronic cigarettes and 49% who reported using them in the past 30 days had never smoked regular cigarettes, or were former smokers, suggesting that the ‘gateway device’ concerns may be becoming more concrete.

The researchers comment that although the risks of e-cigarette use and exposure to vapour are unknown, yet many parents report using these electronic cigarettes to reduce harm to others.

Science is still catching up with the potential harm of e-cigarettes. One of the more disturbing recent findings is about the interaction between e-cigarette vapour and MRSA.

Smoking weakens the immune system and lowers the ability of human cells to fight infection – research has shown this over and over again. Smoking cigarettes, and breathing in second-hand smoke, puts people at risk for developing severe lung and respiratory tract infections. Smokers are two to four times more likely to develop pneumococcal pneumonia than non-smokers. Cigarette smoking also increases the rates and severity of influenza infection and increases the risk of tuberculosis.

Lead author Laura Alexander Crotty explains that e-cigarette users “take in 2- 20 times the amount of vapour in volume, and thus nicotine, than normal smoke. This is because it is so easy to keep inhaling from an e-cigarette – it can keep going for the equivalent of a whole pack of cigarettes, doesn’t make your clothing or breath smell, and can be vaped indoors. Thus e-smokers are dramatically increasing their intake of nicotine, and therefore increasing the exposure of their colonising bacteria to this substance.”

It took decades to deal with the industry misinformation and misdirection about cigarette smoke. We now understand the harm it does. It is hard to believe that anything could be as harmful as cigarette smoke. Yet all indications are that e-cigarettes are simply another form of nicotine that carries the same risks to both the user and anyone in their immediate vicinity.