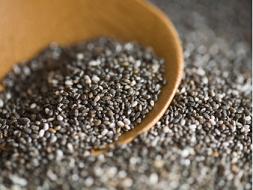 What’s the scoop on chia seeds?

The chia plant originates from the arid plains of South and Central America.

Although it fell out of cultivation with the fall of the Aztec empire, the tiny oval-shaped seeds from the plant were rediscovered in the late 1990s and are now widely grown as a commercial crop.

Once traded as currency, used in religious offerings & burial ceremonies, today oil pressed from the seeds is used for many food and cosmetic purposes and the meal and whole seeds are used to feed livestock and humans.

A member of the mint family, chia (Salvia hispanica) it was first cultivated by the Aztecs, and was a staple of the Aztec diet valued for its nutritional benefits as well as its reported medical benefits.

In other part of the Americas and elsewhere in the world different varieties of chia were also cultivated and different parts of the plant used.

For example the roots of the related plant Salvia columbariae (golden chia) were used as a treatment for stroke by Native Americans. The roots of another related plant, Salvia miltiorrhiza (danshen in traditional Chinese medicine), are widely used to treat a variety of diseases in China, as well as in Japan, Europe, and the United States.

These days chia seed, which can range in colour from white to black, stand alongside flaxseed, rapeseed, sunflower seed, soybean seed, maize, evening primrose as a valuable oil producing crop.

In fact they are composed of approximately 30% oil, of which 17-26% is linoleic acid (omega 6) and 50-57% is linolenic acid (omega-3). Both these essential fatty acids are required by the human body for good health, and since the body cannot make its own, we need to get them from our diets.

It also provides 4.5g of dietary fibre, and a range of important nutrients such as calcium, iron, potassium, vitamin C, magnesium, folate, B vitamins, zinc, selenium and beta carotene.

Chia seeds are also rich in protein. They contain all essential amino acids and are more easily digested than beans, soy or peas.

They also contain high amounts of antioxidants such as quercetin and kaempferol. Substances such as caffeic acid and chlorogenic acids are also present in small quantities.

If you were to believe everything you read they can be used to treat or cure allergies, heart disease, obesity, cancer, hormone imbalance, diabetes, kidney and liver dysfunction, and even depression.

There’s very little evidence support these notions and some of these early claims are made on the basis of the root’s use in herbal medicine. Questions about efficacy and safety may look different depending on whether you are looking at the roots or the seeds.

We focus here on chia seeds which, science is showing, can bring significant health benefits.

Animal studies have shown that chia seeds added to the diet can significantly reduced fatty deposits and LDL (“bad”) cholesterol in the blood while increasing HDL (“good”) cholesterol levels.

There is also evidence that feeding livestock chia seeds can significantly improve their levels of healthy fatty acids.

For instance, eggs from hens fed with chia had the highest ω-3 ALA content as compared to hens fed with flaxseed or rapeseed. Similar benefits have been seen in meat when pigs were fed chia seeds making them a good alternative to fish oils which are increasingly unsustainable.

To date, only a few human trials have been carried out. Among these trials, only one showed no health benefits in terms of overweight loss in at risk adults from chia seed. This difference could be due to the treatment durations employed and also the actual biochemical components of the dietary chia seed used in the various studies.

Later studies have demonstrated the benefits of chia seeds on human health.  In one, postmenopausal women took 25 g per day of ground chia seed resulted in a significant increase in blood levels of omega-3 ALA and EPA.

In another, chia seeds as part of a dietary intervention which included soya protein and oats helped to reduce fatty deposits in the blood and improved glucose intolerance in people with metabolic syndrome.

Unlike other grains, chia seeds are relatively low in carbohydrates – these comprise only 7% of their dry weight. What carbohydrates they do contain are broken down slowly in digestion preventing spikes in blood sugar that can rebound in low mood and hunger pangs.

They also contain over 20% protein and since protein suppresses release of the hunger hormone ghrelin they may be helpful for weight loss.

Chia seeds are surrounded by a layer of water-soluble fibres, they can absorb up to 7 times their weight in water, forming a mucilaginous gel. As the seeds swell in size they fill the stomach.  Added to baked goods they have been shown to help reduce hunger in between meals.

In another chia seeds overweight individuals eating chia seeds baked into white bread experiences a reduction in glycaemia (glucose in the blood) after meals – it also helped the participants feel fuller for longer. The improved glucose levels in the blood after meals, the researchers speculate, could provide a potential explanation for improvements in blood pressure, coagulation and inflammatory markers seen in animal studies.

According to legend, the Tarahumara people, of Northwestern Mexico, are renowned for their long distance running abilities. It is said they developed a tradition of running 200 miles over the course of a couple days to get from one settlement to the next.  Their extraordinary endurance has been put down to a drink called iskaite, which is simply water mixed with chia seeds.

The chia sports drink mix was also more nutritionally more desirable because it had more omega-3s and less sugar, than the sports drink alone.

Though there are no studies on the benefits of chia seeds for skin, omega-3 fatty acids are necessary to support cell membrane health. Adding chia seeds to your diet is a good way to ensure you get the healthy fats you need for great skin.

One of the exceptional qualities of the chia seeds are their hydrophilic properties. They have the ability to absorb more than 12 times their weight in water. This ability to hold on to water offers prolonged hydration which supports the skin but also the healthy function of all of the body’s cells.

Get the best from them

The recommended daily intake is up to 2 tablespoons (30g) of seeds daily. No adverse effects have been noted from taking chia seeds, though if you have and allergy to sesame or mustard seeds you may also react to chia seeds, though this is not a given.

Chia seeds don’t have much flavour on their own which means they can be added to almost anything.

You can simply add them to milk or water.  If you let the seeds sit in the liquid for a while they will become a kind of viscous mass. Some people are fine to drink them this way. For others it is off putting.

For something a little more interesting, try adding them to baked goods, breads, porridges tossing them in yoghurt or cottage cheese, cereals or salads or put some in your smoothies. As with all small seeds, if you want to get best from them, gently crush or grind them first. They will simply pass through the gut undigested unless you give the process a head start.