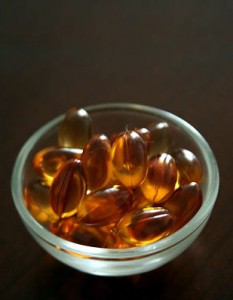 Vitamin-rich foods and supplements that include mixed tocopherols may have more power to prevent cancer [Image: Tamorlan - Wikimedia Commons]

A new view on the cancer fighting potential of vitamin E

Natural Health News — The question of whether vitamin E prevents cancer has been widely debated for years.

Many animal and laboratory studies have suggested that vitamin E could prevent cancer, but human clinical trials have produced mixed results.

A new study, however, may have shed some light on the subject. Does vitamin E prevent cancer? It depends, say researchers at the Ohio State University Comprehensive Cancer Center on how you define vitamin E.

In this laboratory study, published in the journal of the journal Science Signaling, researchers found that in prostate cancer cells one particular form of vitamin E inhibits the activation of an enzyme, Akt, that is essential for cancer cell survival.

The researchers began the work with alpha and gamma forms of the vitamin E molecule. Each inhibited the enzyme called Akt in very targeted ways, but the gamma form emerged as the more powerful.

Based on this the researchers manipulated the structure of gamma form to create a more potent version of this type of vitamin E. Subsequent experiments in mice, showed that this agent reduced the size of prostate cancer tumours whereas placebo had no effect on tumour size.

Further analysis of the treated tumours showed that the Akt enzyme signal was suppressed, confirming the effects were the same in animals as they had been in cell cultures.

These researchers were looking to create a supplement that could be used to create cancer, but their findings also remind us that even though its name makes it sound like a single substance, vitamin E is actually a family of fat-soluble vitamins that are active throughout the body.

Other members of the vitamin E family are called tocotrienols. These members include alpha-, beta-, gamma-, and delta-tocotrienol. As increasing information has become available about these forms of vitamin E, more and more of them are understood to have unique functions.

One recently published paper indicated that the delta-tocopherol form of vitamin E was more effective than other forms of vitamin E in suppressing the development of colon cancer in rats.

Yet another suggested that that gamma- and delta- tocopherols are more protective of breast cancer, reducing inflammation, cell proliferation, and tumour formation than the alpha form so commonly recommended.

As opposed to the alpha form of tocopherol which is mostly used in supplements, the gamma form is the most abundant form of vitamin E in foods, and delta form is abundant in vegetable oils.

Last year a review by scientists at Rutgers University, writing in Cancer Prevention Research, also concluded that the gamma as well as the delta forms of vitamin E, as well as a naturally occurring mixture of tocopherols, had cancer protective properties, though again the alpha form did not. They suggested that mixed tocopherols were a better form of supplement than high dose alpha-tocopherol.

Vitamin-rich foods and supplements that include mixed tocopherols may have more power to prevent cancer [Image: Tamorlan - Wikimedia Commons]