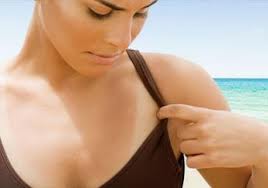 Dietary factors can influence you risk of sunburn for good or for ill, studies show

Natural Health News — Here’s some interesting news from the first ever trial examining the role of omega-3 fatty acids in boosting skin immunity.

In a recent study, 79 healthy volunteers took a 4g dose of omega-3s from oily fish and then were exposed to 8, 15 or 30 minutes under either a summer’s midday in Manchester, UK, or a light machine.

Other study participants took a placebo before using the light machine.

The findings were published in The American Journal of Clinical Nutrition.

“There has been research in this area carried out on mice in the past but this is the first time that there has been a clinical trial directly in people,” said lead researcher Professor Lesley Rhodes. “It has taken a number of years to get to this stage and the findings are very exciting.

“This study adds to the evidence that omega-3 is a potential nutrient to protect against skin cancer. Although the changes we found when someone took the oil were small, they suggest that a continuous low level of chemoprevention from taking omega-3 could reduce the risk of skin cancer over an individual’s lifetime.”

Although omega-3 is not a substitute for sunscreen and other forms of physical protection, it can be regarded as an additional measure to help marshal the skin’s natural resources to fight sun damage.

Protecting the skin through diet

Other aspects of diet are also influential. Previous research has shown that those whose diets are high in omega-6 polyunsaturated fats (i.e. sunflower, safflower and other vegetable oils) are more prone to sun damaged skin. Once consumed these oils are believed to work their way to the skin surface where sunlight oxidises them quickly creating free radicals – unstable molecules that damage the cell’s DNA and lead to photoageing and also skin cancer.

Researchers from the US National Institutes of Health suggest that those whose diets feature foods rich vitamin D and carotenoids (vitamin A-like substances such as beta-carotene, lycopene and lutein, found in deeply coloured fruits and vegetables) also have a lower risk of developing melanoma.

Dietary factors can influence you risk of sunburn for good or for ill, studies show