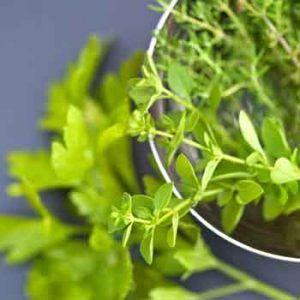 Herbs like parsley and thyme and vegetables like celery and broccoli contain luteolin, a potential new cancer-fighting compound. [Photo: Bigstock]

Natural Health News — A natural compound found in herbs and vegetables could help stop the spread of a particularity deadly type of breast cancer.

Triple-negative breast cancers, which account for 15-20% of all breast tumours, are a type of breast disease that often spreads, or metastasises, to distant sites.

Now, University of Missouri researchers have found that luteolin, a natural compound found in herbs such as thyme and parsley, and vegetables such as celery and broccoli, could reduce the risk of developing metastasis originating from triple-negative breast cancer in women.

“Triple-negative breast cancers are cancer cells that lack three receptors targeted by current chemotherapy regimens. Because of this lack of receptors, common cancer drugs can’t ‘find’ the cells, and doctors must treat the cancer with extremely aggressive and highly toxic treatment strategies,” said Salman Hyder, the Zalk Endowed Professor in Tumor Angiogenesis and professor of biomedical sciences in the College of Veterinary Medicine and the Dalton Cardiovascular Research Center.

» New evidence, from animal and laboratory tests, shows that the plant compound luteolin can help stop the spread of a difficult to treat form of breast cancer called triple negative breast cancer.

» Luteolin is a natural compound found in herbs such as thyme and parsley and in vegetables such as celery and broccoli.

» Triple negative breast cancer accounts for 15-20% of all breast cancers and conventional treatments are generally highly toxic and not necessarily effective.

» The researchers noted that luteolin produced no toxic side effects and not only halted the spread of cancer, but in some cases also killed cancer cells.

Because this kind of cancer spreads to other areas of the body, women can often be caught on a treatment treadmill that, itself, threatens their health. “Therefore,” says Hyder “safer therapeutic therapies that are more effective are being sought for this deadly type of cancer in women.”

Hyder and his team have focused on luteolin, a naturally occurring, non-toxic plant compound that has been proven effective against several types of cancer.

The current study, published in Breast Cancer: Targets and Therapy, used human triple-negative breast cancer cells, grown in mice, and then tested luteolin to see if it could suppress the spread of the cancer to other areas of the body. In the first series of tests, researchers found that luteolin inhibited the metastasis of triple-negative cancer in the lungs of affected animals.

“In almost every case, the mice also saw no weight loss, which means luteolin has no toxic effects; this plant compound is both safe and effective,” Hyder said

The team further tested luteolin and its effects on subduing the migration of triple-negative breast cancer cells throughout the body. The research team tested the cells in dishes that were treated with luteolin and found that migration was, again, inhibited by the plant compound.

“Triple-negative breast cancer cells are highly mobile in the body, which helps them metastasize to other organs throughout the body,” Hyder said. “We found that luteolin inhibits that migration and also can kill cancer cells. We contend that these studies support further investigation of luteolin as an anti-metastatic agent that could be used to combat triple-negative breast cancer and its metastasis.”

The early-stage results of this research are promising. If the next round of studies are successful, say the researchers, human studies into luteolin’s potential as a bona fide new treatment can begin.

Herbs like parsley and thyme and vegetables like celery and broccoli contain luteolin, a potential new cancer-fighting compound. [Photo: Bigstock]