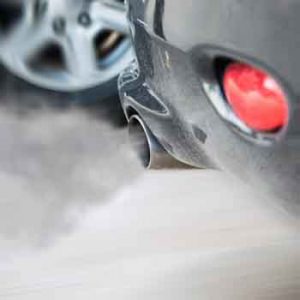 The evidence is piling up that environmental pollution causes brain damage in children. [Photo: Bigstock]

Natural Health News — New research shows that exposure to air pollution early in life produces changes in the brain that could make us more vulnerable to autism and schizophrenia.

The study which used an animal model and found that, as in autism and schizophrenia, these brain changes occurred predominately in males.  The animals also performed poorly in tests of short-term memory, learning ability, and impulsivity.

Although based on animal model the findings are consistent with several recent studies that have shown a link between air pollution and autism in children.  Most notably, a 2013 study in JAMA Psychiatry reported that children who lived in areas with high levels of traffic-related air pollution during their first year of life were three times as likely to develop autism.

Another in 2013 from the Harvard School of Public Health found that women in the US exposed to high levels of air pollution while pregnant were up to twice as likely to have a child with autism as women who lived in areas with low pollution. Other studies have also found this increased level of  risk.

“Our findings add to the growing body of evidence that air pollution may play a role in autism, as well as in other neurodevelopmental disorders,” said Deborah Cory-Slechta, Ph.D., professor of Environmental Medicine at the University of Rochester and lead author of the study, published in the journal Environmental Health Perspectives.

Most air pollution is made up mainly of carbon particles that are produced when fuel is burned by power plants, factories, and cars.  For decades, research on the health effects of air pollution has focused on the part of the body where the damage is most obvious – the lungs.  That research began to show that different-sized particles produce different effects.  Larger particles – the ones regulated by the Environmental Protection Agency (EPA) –  are actually the least harmful because they are coughed up and expelled.

But many researchers believe that smaller particles known as ultrafine particles – which are not regulated by the EPA – are more dangerous, because they are small enough to travel deep into the lungs and be absorbed into the bloodstream, where they can produce toxic effects throughout the body.

That assumption led Cory-Slechta to design a set of experiments that would show whether ultrafine particles have a damaging effect on the brain, and if so, to reveal the mechanism by which they inflict harm.  Her study published today is the first scientific work to do both.

In three sets of experiments, Cory-Slechta and her colleagues exposed mice to levels of air pollution typically found in mid-sized US cities during rush hour.  The exposures were conducted during the first two weeks after birth, a critical time in the brain’s development.  The mice were exposed to polluted air for four hours each day for two four-day periods.

In one group of mice, the brains were examined 24 hours after the final pollution exposure.  In all of those animals, inflammation was rampant throughout the brain, and the lateral ventricles – chambers on each side of the brain that contain cerebrospinal fluid – were enlarged two-to-three times their normal size.

“When we looked closely at the ventricles, we could see that the white matter that normally surrounds them hadn’t fully developed,” said Cory-Slechta.  “It appears that inflammation had damaged those brain cells and prevented that region of the brain from developing, and the ventricles simply expanded to fill the space.”

The problems were also observed in a second group of mice 40 days after exposure and in another group 270 days after exposure, indicating that the damage to the brain was permanent.  Brains of animals in all three groups also had elevated levels of glutamate, a neurotransmitter, which is also seen in humans with autism and schizophrenia.

“I think these findings are going to raise new questions about whether the current regulatory standards for air quality are sufficient to protect our children,” said Cory-Slechta.

The evidence is piling up that environmental pollution causes brain damage in children. [Photo: Bigstock]