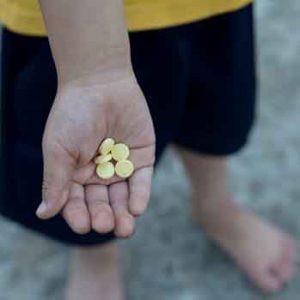 Natural Health News — A new review of dietary approaches to ADHD has turned up some interesting theories about the connection between gut and brain.

Attention-deficit/hyperactivity disorder (ADHD) is a debilitating mental health condition that can hamper a child’s development. Worldwide around 6% of children are thought to suffer from this condition. The underlying causes include both genetic and environmental factors and may differ between individuals.

This makes it very difficult to study.

For this analysis the researchers looked at 14 different studies, each of which was, itself, an analysis of existing research into the effect on ADHD. The studies they looked at focused on various dietary interventions such as eliminating ingredients like sugar or artificial food colours, or known allergens (gluten/high histamine) or limiting the diet to just a few foods (lamb, chicken, potatoes, rice, banana, apple and brassica) or supplementing with omega 3s.

Beyond cause and effect

What makes this analysis, published in the journal PLOS One, unique is the way the researchers attempted to push the analysis beyond simple cause and effect to a broader discussion of how food exerted its effect on children – and which children might be the most sensitive to such interventions.

» Doctors and parents have very little to guide them on which dietary interventions may help mitigate some of the worst symptoms of attention-deficit/hyperactivity disorder (ADHD).

» New research suggests that it may not be a simple case of cause and effect and that intestinal bacteria, which is subject to rapid change when diets are changed, may hold the key to why some children respond and others don’t.

In their analysis, according to the researchers from Wageningen University, Netherlands, the effect of polyunsaturated fatty acid (PUFA) supplementation was unlikely to provide a ‘tangible contribution’ to ADHD management.

While individual children may respond to PUFA treatment, in the group as a whole, the effect of PUFA supplement was, according to the scientists, “small to negligible, warranting the conclusion that as yet PUFA supplementation should not be advised as a treatment of ADHD,”

This finding was unexpected since in general there is encouraging data suggesting that children and others with the lowest levels of omega-3, or who show an unfavourable ratio of omega 3 to omega 6 in their blood, can benefit from supplementation.

The review notes that the use of PUFA as a dietary intervention to manage neurological disorders has been met with a certain degree of success.

They point to another review which provided evidence for a small effect noticed by supplementing the diet with free omega-3 fatty acids, such as eicosapentaenoic acid (EPA), and docosahexaenoic acid (DHA).

What made some children respond to dietary interventions like PUFA supplementation, while others didn’t, the authors suggest, is the environment in the gut. Indeed, the gut flora is an environment that responds rapidly to a change of diet, opening up possibilities for probiotic intervention.

Gut flora has been shown to produce neurochemicals similar to those produced by the brain and gut-brain signalling research has shown the microbiota and its microbiome as influencing brain development and behaviour.

The mimicking of the brain’s activities by the gut microbiota also opens up the possibility of further research into the two-way communication between gut and brain that may play a role in the onset of certain psychiatric disorders.

The potential benefits of probiotics in managing neurologic diseases is an area of great interest. However, there is little to guide parents or doctors on optimal formulation, dosage and timing let alone which children would benefit most.

The authors conclude that learning more about “Differences in neurotransmitters or in microbiota composition could provide an explanation for individual differences in diet response.”