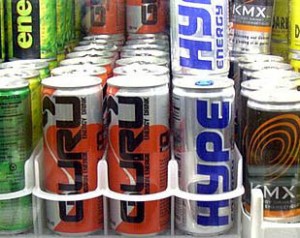 Bathing your teeth in acid – that's scientists' verdict about what energy drinks do for us [Image: Grendelkhan - Wikimedia Commons]

Natural Health News — A new study has found that an alarming increase in the consumption of sports and energy drinks, especially among adolescents, is causing irreversible damage to teeth – specifically, the high acidity levels in the drinks erode tooth enamel, the glossy outer layer of the tooth.

To test the effect of the acidity levels, the researchers immersed samples of human tooth enamel in each beverage for 15 minutes, followed by immersion in artificial saliva for two hours.

This cycle was repeated four times a day for five days, simulating the exposure that young people subject their teeth to when they drink these kinds of beverages ever few hours. The samples were stored in fresh artificial saliva at all other times. The results will be published in General Dentistry, the peer-reviewed clinical journal of the Academy of General Dentistry,

Bathing their teeth in acid

“Young adults consume these drinks assuming that they will improve their sports performance and energy levels and that they are ‘better’ for them than soda,” says Poonam Jain, BDS, MS, MPH, lead author of the study. “Most of these patients are shocked to learn that these drinks are essentially bathing their teeth with acid.”

With a reported 30 -50 % of teens consuming energy drinks regularly it is important to educate parents and young adults about the downside of these drinks. Damage caused to tooth enamel is irreversible, and without the protection of enamel, teeth become overly sensitive, prone to cavities, and more likely to decay.

Take them of the menu!

Taking energy and sports drinks off the menu for kids is the logical reaction to the story and not just to protect their teeth. The ‘energy’ in sports and energy drinks comes from a combination of sugar and caffeine.

One 201o study found that 75% of children surveyed consumed caffeine on a daily basis. Children aged 5 to 7 drank an average of 52 milligrams of caffeine a day, about the amount found in a can of soda. Children aged  8 to 12were taking in twice as much — an average of 109 milligrams a day, equivalent to nearly three cans of  soda. The more sodas the children drank, the less sleep they got.

Ironically because of their sugar content, sports and energy drinks and sodas are also a contributing factor in weight gain. Many children, in fact drink the drink, but don’t do the sports.

Drinks that use artificial sweeteners are little better since many observers believe these are little more than ‘sweet poison‘ ; indeed there are many long running campaigns to alert people to potential health risks.

If your kids are doing sports you’ve already won half the battle. If they are thirsty teaching them the value of water and how much they need each day is the other half!

Bathing your teeth in acid – that's scientists' verdict about what energy drinks do for us [Image: Grendelkhan - Wikimedia Commons]