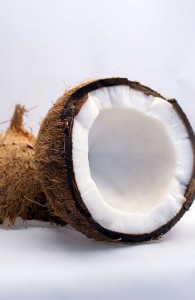 A lovely bunch of coconuts - the latest weapon in the fight against tooth decay? [Image: Robert Wetzlmayr - Wikimedia Commons]

Natural Health News — Forget minty toothpaste. If you want to fight cavities coconut oil is what you need.

Coconut oil is a natural antibiotic and researchers at the Athlone Institute of Technology, Ireland, set out to determine whether  it might be effective against some strains of the Streptococcus bacterium, which naturally inhabit the human mouth and,when allowed to proliferate can cause tooth decay.

They tested the coconut oil in its natural and semi-digested state. They also added enzymes so that the oil could be tested in a digested state. The researchers reported their findings recently at the Society for General Microbiology’s autumn conference at the University of Warwick, England.

Although natural, undigested coconut oil appeared to have no impact, the scientists found that the digested oil stopped most Streptococcus bacteria from multiplying. Of particular interest was the bacterium Streptococcus mutans

Of all the oral streptococci S. mutans is the most cariogenic – in other words it is most likely to produce or promote tooth decay. The bacterium, which  exists on certain types of carbohydrates, sticks to the surface of the tooth and as it metabolises sugars and other sources of energy, it produces an acid that damages teeth. Virtually all humans carry S. mutans in their oral cavity.

Dr. Damien Brady who led the research explained that previous studies had demonstrated that certain foodstuffs, when semi-digested, had the capacity to destroy micro-organisms.

The binding of S. mutans to tooth enamel was, for example, significantly reduced when teeth were exposed to enzyme-modified milk in one study, he said. It was that study that encouraged this team to test out other foods.

The researchers plan to see how coconut oil interacts with Streptococcus bacteria at molecular level. They also want to find out whether digested coconut oil might combat other pathogens, including some types of bacteria and yeasts.

Said Brady “Incorporating enzyme-modified coconut oil into dental hygiene products would be an attractive alternative to chemical additives, particularly as it works at relatively low concentrations. Also, with increasing antibiotic resistance, it is important that we turn our attention to new ways to combat microbial infection.”

The work also contributes to our understanding of antibacterial activity in the human gut. “Our data suggests that products of human digestion show antimicrobial activity. This could have implications for how bacteria colonize the cells lining the digestive tract and for overall gut health,” explained Dr Brady.

A lovely bunch of coconuts - the latest weapon in the fight against tooth decay? [Image: Robert Wetzlmayr - Wikimedia Commons]