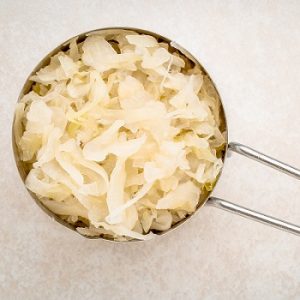 Fermented foods such as sauerkraut are full of probiotic organisms that can help improve emotional health by improving gut health. [Photo: Bigstock]

Natural Health News — If you suffer from social anxiety the problem may not be all in your mind.

Psychologists have traditionally looked to the mind to help people living with mental health issues. But a recent study has shown that the stomach may also play a key role, suggesting that the old adage “you are what you eat” is more than just a cliché.

The researchers investigated a possible connection between fermented foods, which contain probiotics, and social anxiety. They found that young adults who eat more fermented foods have fewer social anxiety symptoms, with the effect being greatest among those at genetic risk for social anxiety disorder as measured by a personality trait known as ‘neuroticism’ which is characterised by anxiety, fear, moodiness, worry, envy, frustration, jealousy, and loneliness.

» Diet can be influential on in cases of anxiety and mental health. Previous research suggests this influence extends beyond simple nutrients, to maintaining a healthy gut flora.

» Traditionally fermented foods, such as sauerkraut and kimchi are rich in friendly bacteria that help maintain a healthy gut.

» In the current study students who ate more fermented foods were less likely to suffer from social anxiety.

People who are prone to neuroticism are often shy and self-conscious, they respond poorly to stress, and are more likely to interpret ordinary situations as threatening, and minor frustrations as hopelessly difficult.

How the gut influences the mind

“It is likely that the probiotics in the fermented foods are favourably changing the environment in the gut, and changes in the gut in turn influence social anxiety,” said Matthew Hilimire, a psychology professor at William & Mary College in Virginia and one of the lead authors of the study. “I think that it is absolutely fascinating that the microorganisms in your gut can influence your mind.”

About 700 students participated in the study published online ahead of print in the journal Psychiatry Research. They were asked to fill in a questionnaire which asked about their intake of fermented foods over the previous 30 days; it also asked about exercise frequency and the average consumption of fruits and vegetables so that the researchers could control for healthy habits outside of fermented food intake.

A treatment that is open to all

“The main finding was that individuals who had consumed more fermented foods had reduced social anxiety.” That relationship, says Hilimire, was strongest amongst people that were high in neuroticism.

A secondary finding was that more exercise was also related to lower levels of social anxiety.

The study, says the research team, is just the first in a series they have planned to continue exploring the mind-gut connection. “Assuming similar findings in the experimental follow-up, what it would suggest is that you could augment more traditional therapies (like medications, psychotherapy or a combination of the two) with fermented foods — dietary changes – and exercise, as well.” says Hilimire

These approaches are low-risk interventions, open to all, and easily incorporated into most people’s lives, with few of the debilitating side effects that come with pharmaceutical treatments.

Fermented foods such as sauerkraut are full of probiotic organisms that can help improve emotional health by improving gut health. [Photo: Bigstock]