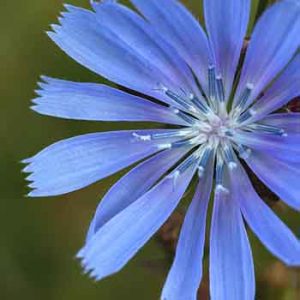 The root of the chicory plant is a common source of supplemental inulin. [Photo: Bigstock]

Asthma – can we treat it through the gut?

Natural Health News — Data from a recent Australian trial have suggested that getting enough fibre isn’t just good for your gut – it may help asthma sufferers to keep their condition under control.

This is the first time researchers have looked at the impact of altering the gut microbiome on asthma control in humans.

The study, conducted by the University of Newcastle’s Priority Research Centre for Healthy Lungs, gave otherwise healthy asthmatics daily supplements with inulin, a soluble fibre found naturally in chicory and dandelion, roots, asparagus, leeks, onions and garlic, as well as bananas and plantain.

Changes in asthma control, lung function, and gut microbiota were then monitored.

The researchers found that fibre supplements altered the gut microbiome, which in turn had a positive effect on asthma control and reduced airway inflammation. The treatment was most effective in people whose asthma was poorly controlled at the start of the intervention.

» For many asthmatics using a ‘puffer’ isn’t enough to keep control of their symptoms. Doctors find these individuals difficult to treat.

» A new study from Australia – the first of its kind – has found that a daily supplement of insoluble fibre changes the gut flora in a way that helps control inflammation in the lungs.

» In a separate study the same research team looked at the impact of saturated fat on airway inflammation and found that it can quickly worsen symptoms.

» Taken together the studies suggest a new paradigm for how diet can be used to treat asthma.

An estimated 300m people worldwide suffer from asthma, with 250,000 deaths are attributed to the disease annually.

Presenting the study ahead of publication at the Thoracic Society for Australia and New Zealand (TSANZ) Annual Scientific Meeting in Canberra, lead researcher Professor Lisa Wood said: “This ground-breaking research offers hope of a viable, complementary treatment for tens of millions of asthmatics around the world struggling to control their asthma with existing medications.”

Another study being presented by the group examined the impact of fatty foods on asthma. It found that as little as a single meal high in saturated fats worsens inflammation. This results in a temporary narrowing of the airways that carry oxygen to the lungs, and leads to asthma symptoms such as coughing, wheezing, shortness of breath, and chest tightness.

“For many obese asthmatics, using puffers to control their asthma simply isn’t working and it has doctors baffled,” said Professor Peter Gibson, president of TSANZ at the conference.

“With almost two out of three adult Australians obese or overweight, this is becoming an increasingly pressing issue. These studies – which shed light on how diet can impact asthma by its effect on the gut microbiome and airway inflammation – hold particular significance for this group,” he added.

However, the researchers are keen to emphasise the important messages these studies hold for all Australians and indeed all those suffering from asthma.

“More and more we are learning about how our Westernised, highly processed diet is negatively impacting our health. These studies show both how diets high in fat can worsen asthma, and how – conversely – a diet high in soluble fibre can help manage it. It illustrates just how vitally important it is that Australians eat a healthily and how fundamental healthy gut bacteria are to our well-being,” said Professor Wood.

The root of the chicory plant is a common source of supplemental inulin. [Photo: Bigstock]