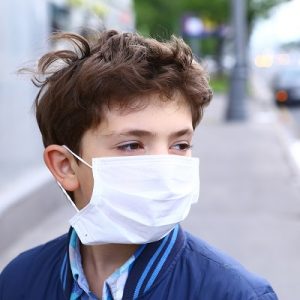 Chinese scientists have discovered a link between air pollution and an increased risk of measles. [Photo: Bigstock]

Natural Health News — When it comes to measles outbreaks there may be more to consider than whether or not your child is vaccinated. According to a new study from China, levels of air pollution are also influential.

China is in the grip of a serious air pollution problem, one that has been growing as the country becomes more industrialised. As a result the air can be saturated not just with toxic gases but with particulates, tiny particles made up of solids and liquids. Particulate come from many sources.

Those originating from road traffic include carbon emissions from engines, small bits of metal and rubber from engine wear and braking as well as dust from road surfaces. Others include material from building and industry as well as wind-blown dust, sea salt, pollens and soil particles.

People often associate particles with smoky engines, but the majority of particles that can penetrate the airway are too small to see, and thus can be present in air that seems clean.

Once inhaled they quickly get into the bloodstream via the lungs and can have multiple detrimental effects on health.

» Vulnerability to childhood diseases such as measles is the result of many different factors – not just whether a child has been vaccinated. Diet and environment, for example, play a part.

» In a new study, Chinese scientists have found a small but significant association between exposure to air pollution and measles outbreaks.

» The results are relevant because China has a near 100% vaccination rate, and yet measles outbreaks continue to baffle doctors.

The scientists collected data on the daily number of new measles cases and compared this to data on concentrations of ambient particles (PM2.5, or particles smaller than 2.5 microns) from 21 cities in China between October 2013 and December 2014.

The results, published in the journal Environmental Research, revealed a small but significant association between increase in the number of ambient particles and measles incidence. The association was measles associations stronger on days with high temperature, low humidity, and high wind speed – perfect conditions for the growth and spread of disease.

According to the authors: “We provide new evidence that measles incidence is associated with exposure to ambient PM2.5 in China. Effective policies to reduce air pollution may also reduce measles incidence.”

Outbreaks in spite of vaccination

In China vaccination is compulsory and there is a nearly 100% vaccination rate, and yet measles has proved impossible to eradicate. Exposed to the virus some children will succumb and others won’t which suggests that exposure to the ‘germ’ is only one factor in what makes a child vulnerable. Immune status, which in turn is influenced by things like diet but also environmental factors, is also influential.

If air pollution can influence measles vulnerability then it is possible that other environmental poisons, such as exposure to pesticides, pollutants in drinking water, furniture treated with flame retardants and a multitude of other modern toxicants, could similarly reduce immunity to this and other childhood diseases (whether a child is vaccinated or not).

Parents who choose not to vaccinate are taking this kind of data into account as well as concerns for any adverse effects of vaccination. Many believe that measles is a largely benign childhood disease and that the fear of it has become irrational and that evidence exists to show a protective effect. For example, levels of atopic and allergic diseases have been shown to be lower in children who have had measles.

The decision to vaccinate or not is a very personal one – but as studies like this emerge it is worth considering whether parents are being allowed make that decision based on all the relevant facts.

Chinese scientists have discovered a link between air pollution and an increased risk of measles. [Photo: Bigstock]