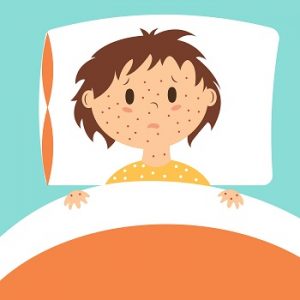 Measles is a viral infection.

It occurs mostly in young children and is passed on via water vapour or droplets (for instance from sneezing or coughing) from an infected person.

Its main symptoms are mild fever and reddish-brown blotchy rash. These usually appear after a 10 day incubation period during which the child may have cold-like symptoms including tiredness, irritability, dislike of bright light, cough and runny eyes.

The rash usually breaks out on the forehead and face, and can spread down the neck to the feet. This process can go on for 5-8 days before it begins to get better. It’s uncomfortable, it’s highly contagious but in healthy children it is not lethal. The best medicine for measles is loving and attentive parental care, plenty of fluids, light, healthy foods and rest.

Rates on the rise

In spite of comprehensive vaccination programmes throughout most of the developed world measles persists. Indeed, vaccinated children can still get the measles – as researchers in Canada have found.

This suggests that there is more to ‘protecting’ children than simply vaccinating them. In any group of children exposed to the virus, some may succumb to the disease and some will not and yet discovering why some children are vulnerable and others are not has never been a research priority.

A recent study in China has discovered that measles incidence in vaccinated children is associated with increased levels of air pollution – indicating the role of the immune system in protecting against measles.

Likewise, in spite of media reports to the contrary, measles is a largely benign childhood disease. In the UK, for example, Office for National Statistics figures show, for example, that no child has died from measles in England and Wales since 1992. Any deaths from measles have been in immune compromised adults.

There is even evidence that in children measles can be protective; levels of atopic and allergic diseases, for example, have been shown to be lower in children who have had measles.

It is also known that the general level of immunity in a child will be influential on whether a child succumbs – as it will be for any disease. This means that children whose systems are stressed – for instance through poverty, poor hygiene, poor diet, exposure to pollution, etc – may be more vulnerable.

We believe that if your child gets measles, symptoms and discomfort can be helped and the immune system supported with complementary remedies. If you suspect you child has measles, we recommend you seek the advice of a doctor who can confirm the diagnosis and discuss treatment options.

There is no conventional ‘treatment’ for measles. Antibiotics will not work because measles is caused by a virus – though in very rare cases they may be prescribed for secondary bacterial infections or complications like pneumonia. If you choose to use natural remedies these can safely be used alongside any treatment your doctor may recommend.

Herbal teas can help treat a number of symptoms.  A mixture of nettle and elderflower will help to boost immunity, keep up vitamins and minerals and fight off the infection helping to avoid any other health challenges. If your child has a cough consider honey rather than cough mixtures or try a soothing liquorice tea sweetened with honey.

For a general immune boost, make an infusion of catnip, chamomile, echinacea, elderflower and yarrow.  Take one cupful three times a day You can also take these herbs as tinctures; tsp of combined tincture to 25mls of water and consume this 3 times a day as above. Do not use catnip or yarrow during pregnancy.

You can also use herbs externally to soothe any itching. To soothe eyes make an infusion of eyebright, allow it to cool and apply as a compress to cool sore eyes. You can also use 1 drop of eyebright tincture in 10ml of cooled boiled water as an eye wash.

To soothe itchy skin combine equal amounts of chamomile, marigold and marshmallow to make an infusion. Allow to cool and use the solution to sponge down the body to reduce fever and calm irritated or itchy skin.

Choose the remedy that best matches the symptom pattern your child is experiencing or, if in doubt, seek the advice of a qualified practitioner.

Aconite 30C For the initial stages. A restless, fearful child with a high temperature; eyes ache from exposure to light; both eyes and nose are streaming, hard croupy cough. Give one dose every few hours until improvement occurs.

Belladonna 30C or 200C For the early stages of any childhood illness – accompanied by fever. Symptoms may include restlessness, flushed skin, high temperature and sore throat. One dose, three times a day for 2-3 days.

Bryonia 30C Use if the rash is slow to appear; accompanied by painful, dry cough. The child will be thirsty, irritable and symptoms are worse from movement. Two or three doses a day.

Pulsatilla 30CFor catarrhal symptoms; profuse watery eyes. Cough will be dry at night, looser in daytime. Other symptoms include dry mouth, but seldom thirsty. Child also feels very sorry for his or herself. Give two or three doses a day over two to three days.

Vitamin C, vitamin D, Zinc and garlic can all help to boost immunity as the infection takes its course. If your child is old enough to take supplements consider using these. For young children consider liquid supplements which can be taken directly by mouth or added to drinks.

Dilute three drops of each chamomile, eucalyptus and lavender essential oils in in 200ml of water and use to sponge down the body.

Fever is uncomfortable but it is also an important part of the healing process and shows your child’s body is working to fight off the disease. Instead of Calpol and paracetamol use  simple methods like light layers of clothing, a tepid bath or cool compresses.

These additional alternatives are tried and tested for dealing with other uncomfortable symptoms:

Baking soda Add a cupful to a tepid bath will soothe itching.

Make an oatmeal bath bag Cut the foot off an old pair of tights. Put some oatmeal into it and tie it off. Soak it well and squeeze; use the soothing cream this produces to cleanse instead of soap. Alternatively simply use a larger length of tights (large enough to take 1-2 cupfuls of oats) like a giant ‘teabag ’to infuse the water with soothing oat extract.