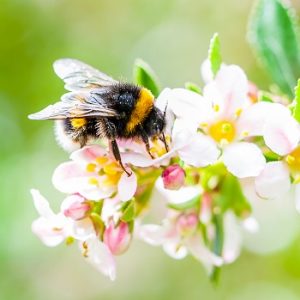 Honeybees hog the limelight, yet wild insects are the most important and vulnerable pollinators

Pollinating insects like bees, butterflies and flies have had a rough time of late. A broad library of evidence suggests there has been a widespread decline in their abundance and diversity since the 1950s.

This matters because such insects are critical both for the reproduction of wild plants and for agricultural food production.

The decline of these pollinators is linked with destruction of natural habitats like forests and meadows, the spread of pests such as Varroa mite and diseases like foulbrood, and the increasing use of agrochemicals by farmers. Although there have been well documented declines in managed honeybees, non-Apis (non-honeybee) pollinators such as bumblebees and solitary bees have also become endangered.

There are more than 800 wild (non-honey) bee species in Europe alone. Seven are classified by the IUCN Redlist as critically endangered, 46 are endangered, 24 are vulnerable and 101 are near threatened. Collectively, losing such species would have a significant impact on global pollination.

Though much of the media focus is on honeybees, they are responsible for only a third of the crop pollination in Britain and a very small proportion of wild plant pollination. A range of other insects including butterflies, bumblebees and small flies make up for this pollination deficit.

» While much of our conservation effort – and media attention – is focused on the honeybee, other pollinators such as butterflies, wild bees and small flies, need protection too.

» There are more than 800 wild (non-honey) bee species in Europe alone, a significant proportion of which are endangered or vulnerable.

Not all pollinators are created equal

Pollinators also vary in their effectiveness due to their behaviour around flowers and their capacity to hold pollen. Bigger and hairier insects can carry more pollen, while those that groom themselves less tend to be able to transfer pollen more effectively. Bumblebees, for example, make excellent pollinators (far superior to honeybees) as they are big, hairy and do not groom themselves as often.

Where they are in decline, honeybees suffer primarily from pests and diseases, a consequence of poor nutrition and artificially high population density. This differs from other pollinators, where the decline is mainly down to habitat destruction. It seems pesticides affect all pollinators.

Curiously, the issues facing non-Apis pollinators may be exacerbated by commercial beekeeping, and attempts to help honeybees may even harm efforts to conserve wild pollinators.

The problem is that there are only so many flowers and places to nest. And once the numbers of honeybees have been artificially inflated (commercial-scale beekeeping wouldn’t exist without humans) the increased competition for these resources can push native non-Apis pollinators out of their natural habitats. Honeybees also spread exotic plants and transmit pathogens, both of which have been shown to harm other pollinators.

Over the coming decades, farmers and those who regulate them are faced with a tough challenge. Agricultural output must be increased to feed a growing human population, but simultaneously the environmental impact must be reduced.

The agriculture sector has tried to address the need to feed a growing population through conventional farming practices such as mechanisation, larger fields or the use of pesticides and fertiliser. Yet these have contributed to widespread destruction of natural landscapes and loss of natural capital.

So-called agri-environment schemes represent the best way to help insect pollinators. That means diversifying crops, avoiding an ecologically-fragile monoculture and ensuring that the insects can jump between different food sources. It also means protecting natural habitats and establishing ecological focus areas such as wildflower strips, while limiting the use of pesticides and fertilisers.

As pollinating insects need a surprisingly large area of land to forage, linking up restored habitats on a larger scale provides far more evident and immediate benefits. However, so far, connections between protected areas have not been a priority, leading to inefficient conservation.