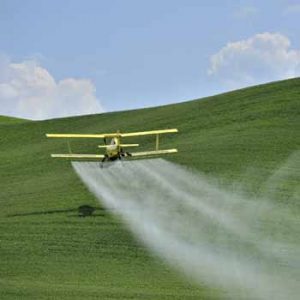 IARC has determined that glyphosate is toxic both in its pure form and in the commercial formulations which farmers and gardeners use. [Photo: Bigstock]

Last year the  International Agency for Research on Cancer, declared glyphosate – the world’s most widley used herbicide – to be a ‘probable human carcinogen’. The pesticides industry reacted with a predictable campaign of misinformation about the assessment, how it was performed and what it meant.

In a recent Q&A statement the IARC – a World Health Organization agency – answered key questions around this misinformation which make it clear that glyphosate in both its ‘pure’ form and in the formulations sold to consumers and farmers is carcinogenic and genotoxic (causing cellular damage, at a genetic level, which can also lead to cancer). The information is timely since the European Union is currently considering whether to relicense glyphosate even as polls show that  two thirds of Europeans support a total ban on the toxic herbicide.

Here’s what IARC had to say

In March 2015, IARC classified glyphosate as “probably carcinogenic to humans” (Group 2A).

» Last year the IARC determined that glyphosate – the world’s most widley used herbicide – is a ‘probable human carcinogen’.

» In a new Q&A it says that this determination was based on studies into exposure to glyphosate on its own as well as in the many different formulations in which it is sold – and, crucially, on ‘real world’ exposures as opposed to unrealistically high doses.

» In particular, there was strong evidence for the genotoxicity of glyphosate – on its own and in formulations. Genotoxicity is the ability of a substance to cause the kind of genetic damage that can lead to cancer.

» Commenting on why IARC conclusions differ from those of government regulators the IARC stressed that regulators rely heavily on industry data rather than more reliable and publicly available data from independent scientists.

IARC also concluded that there was “strong” evidence for genotoxicity, both for “pure” glyphosate and for glyphosate formulations.

The IARC Monographs evaluation is based on the systematic assembly and review of all publicly available and pertinent studies, by independent experts, free from vested interests. It follows strict scientific criteria, and the classification system is recognized and used as a reference all around the world. This is because IARC evaluations are based on independent scientific review and rigorous criteria and procedures.

To reach these conclusions, IARC reviewed about 1000 studies. Some of the studies looked at people exposed through their jobs, such as farmers. Others were experimental studies on cancer and cancer-related effects in experimental systems.

Could the carcinogenic effects of glyphosate be related to the other chemicals in the formulations?

For the experimental studies of “pure” glyphosate, the Monograph concluded that the evidence for causing cancer in experimental animals was “sufficient” and the evidence for causing genotoxicity was “strong”. The real-world exposures experienced by human populations are to a variety of formulations of glyphosate with other chemicals, because this is how glyphosate is mainly sold and used. Similar results were reported in studies of different formulations used in different geographical regions at different times.

Could the co-formulants be the cause of the genotoxic effects reported in the IARC Monograph?

Several of the epidemiological studies considered by the IARC expert Working Group showed increased cancer rates in occupational settings after exposure to glyphosate herbicides. Can this be attributed to glyphosate as a single ingredient or could it be due to other chemicals in the formulations?

Real-world exposures that people experience are to glyphosate in formulated products. Studies of humans exposed to different formulations in different regions at different times reported similar increases in the same type of cancer, non-Hodgkin lymphoma. Data on “pure” glyphosate from animal and other experimental studies, including on human cells, support the conclusion from the studies of exposed people. For the studies of “pure” glyphosate, the Monograph concluded that the evidence for cancer in experimental animals was “sufficient” and the evidence for genotoxicity was “strong”.

One of the key studies evaluated in the Monograph was the United States Agricultural Health Study (AHS). This study did not find an association between non-Hodgkin lymphoma and glyphosate. Can this study alone outweigh the positive associations found in other epidemiological studies?

The Agricultural Health Study (AHS) has been described as the “most powerful” study, but this is not correct. The AHS collected data on cancer and pesticide use in more than 50 000 farmers and pesticide applicators in two states in the USA. The weakness of the study is that people were followed up for a short period of time, which means fewer cases of cancer would have had time to appear. This factor can limit the ability of a study to detect an association if one truly exists. Therefore, although the AHS is a large, well-conducted study, its results on glyphosate and non-Hodgkin lymphoma risk do not outweigh those of other studies.

In the studies IARC evaluated, were there cancers only seen in animals exposed to the toxic doses of glyphosate?

No. The IARC Working Group identified statistically significant trends of higher numbers of cancers with higher doses of “pure” glyphosate in studies of mice, suggesting increasing response with dose. Cancers were seen in the absence of toxicity.

An important consideration in the IARC Working Group’s evaluation was that glyphosate caused unusual types of tumours, which are very rarely seen in untreated animals. Rare tumours can provide important evidence of a cause-and-effect relationship, but may only be seen at high doses. The IARC Working Group’s evaluation of these tumours was in line with accepted principles and gave highly significant results.

Regulatory agencies have reviewed the key studies examined by IARC – and more – and concluded that glyphosate poses no unreasonable risks to humans. What did IARC do differently?

For the IARC Monograph on glyphosate, the total volume of publications and other information sources considered by the Working Group was about 1000 citations. All citations were then screened for relevance, following the principles in the Preamble to the IARC Monographs.

After this screening process, the Monograph sections on cancer epidemiology and cancer bioassays in laboratory animals cited every included study. The sections on exposure and mechanisms of carcinogenesis consider representative studies and therefore do not necessarily cite every identified study. Once published, the IARC Monograph on glyphosate cited 269 references.

In the interests of transparency, IARC evaluations rely only on data that are in the public domain and available for independent scientific review. The IARC Working Group’s evaluation of glyphosate included any industry studies that met these criteria. However, they did not include data from summary tables in online supplements to published articles, which did not provide enough detail for independent assessment. This was the case with some of the industry studies of cancer in experimental animals.

With the material reviewed by the Working Group, there was enough evidence to conclude that glyphosate is probably carcinogenic to humans.

What does IARC’s classification mean in terms of the probability of developing a cancer?

The IARC Monographs evaluation is a hazard classification. It indicates the strength of evidence that glyphosate can cause cancer. The probability of developing a cancer will depend on factors such as the type and extent of exposure and the strength of the effect of the agent.

IARC has determined that glyphosate is toxic both in its pure form and in the commercial formulations which farmers and gardeners use. [Photo: Bigstock]