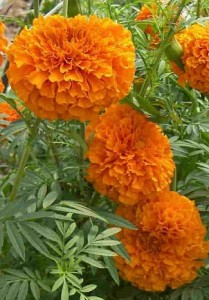 Marigolds are a natural source of eye-protecting lutein

Natural Health News — Increased intakes of lutein may not only have a direct beneficial role in the macula of the eye, but may also help fight systemic inflammation, according to a new study.

Macula is a yellow spot of about five millimeters diameter on the retina. A thin macular pigment can allow the blue light through and destroy the cells. Maintaining high levels of both carotenoids, and therefore the macular pigment, is a valid approach to maintaining eye health and reducing the risk of diseases, like AMD.

The new study, published in Acta Ophthalmology , adds to an ever growing body of science supporting the vital role of the carotenoids lutein and zeaxanthin for eye health. These compounds are the only carotenoids capable of filtering the harmful blue light than can damage cells in the eye, the rods and the cones.

The researchers recruited 70 people with early stage AMD and randomly assigned to them to receive either 10 mg per day of lutein or placebo for one year.

Results  indicated that supplementation with 10 mg per day of lutein  reduced levels of a substance in the body called sC5b-9, a marker of systemic inflammation, compared to placebo.

The link between lutein and eye health was first reported in 1994 by Harvard University researchers, who found a link between the intake of carotenoid-rich food, particularly dark green leafy vegetables like spinach, and a significant reduction in AMD.

This study is the first to show that an increased dietary intake of lutein reduces the plasma level of sC5b-9 accordign to the scientists from the University Eye Clinic Maastricht in The Netherlands and the University of Manchester in England.

Due to the links between systemic inflammation and the course of AMD they add that “lutein supplementation can be considered as a potential prevention and treatment for AMD.”

Marigolds are a natural source of eye-protecting lutein