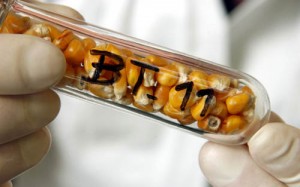 Genetically engineered corn, say scientists, is a threat to the environment and our health

Natural Health News — Twenty two top scientists in the US have written to the Environment Protection Agency asking it to urgently address the problem of pests’ resistance to Monsanto’s genetically engineered insecticide-producing Bt crops.

In their letter to the EPA the scientists say Monsanto’s BT crops are a failure that pose an increasing threat to the environment.

They note that in several different places across the corn belt, corn rootworms have developed resistance to an inserted gene that is supposed to kill them.

Now, in order to slow down or prevent the spread of resistance, the researchers want seed companies to give farmers a non-GMO option and stop routinely inserting insecticide-producing genes into all of their most productive seed lines.

According to the letter, Monsanto has left farmers with “few options” – even in some areas where rootworms don’t pose a serious problem.

The researchers are calling on farmers in some parts of the country to stop planting corn with insecticide-producing genes altogether, or to plant such corn only intermittently.

A threat to our health

In 2008 a Dr. Jurgen Zentek, a professor at the University of Veterinary Medicine Vienna, reported the results of a 20-week study where he fed one group of laboratory mice traditional corn and another group Monsanto’s genetically modified corn

Results showed that  that the mice who ate the modified corn had fewer litters, fewer offspring, and more instances of complete infertility than those receiving a conventional diet. Not only that, but the infertility of the GM-corn-fed rodents became more pronounced with each passing litter.

As already reported on this site, in 2010 a study reported that the insecticide-producing Bt gene has been detected in the blood of pregnant women, their fetuses and non-pregnant women who ate typical diets.

Earlier this year new scientific research revealing the health risks of Bt crops has spurred France and Germany to seek an EU-wide ban. The new research follows up on a Monsanto study where rats fed the corn showed evidence of liver and kidney toxicity, providing evidence that the engineered Bt gene actually kills human cells.

The US, however, continues its grand uncontrolled GM experiment on its citizens. With bio-engineered seeds accounting for as much as 85% of the corn crop in the US, it’s all but impossible to avoid in one form (on the cob) or another (sweetener for soft drinks).

The Organic Consumers Association is urging everyone who cares about the future of agriculture and the protection of human health, please write to the EPA today, demanding a total ban on insecticide-producing GMO crops. You can sign their petition here.

Genetically engineered corn, say scientists, is a threat to the environment and our health