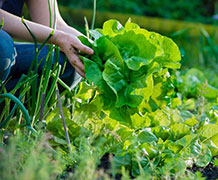 Lettuce roots can be damaged by Ibuprofen in the environment

Natural Health News — The drugs we release into the environment are likely to have a significant impact on the growth of food crops, according to a new study.

By assessing the impacts of a range of non-steroidal anti-inflammatory drugs, the research published in the Journal of Ecotoxicology and Environmental Safety,has shown that the growth of edible crops can be affected by these chemicals – even at the very low concentrations found in the environment.

British researchers from University of Exeter Medical School and Plymouth University focused their analysis on lettuce and radish plants and tested the effects of several commonly prescribed drugs, including diclofenac and ibuprofen. These drugs are among the most common and widely used group of pharmaceuticals, with more than 30 million prescribed across the world every day.

The potential for these chemicals to influence plants is becoming increasingly relevant, particularly as waste management systems are unable to remove many compounds from our sewage. Drugs for human use make their way into soil through a number of routes, including the use of sewage sludge as fertiliser and waste water for irrigation.

This study looked for a number of changes in edible plants, assessing factors such as water content, root and shoot length, overall size and how effectively the plants photosynthesised.

Each drug was shown to affect the plants in very specific ways, with marked differences between drugs that are closely related. For example, drugs from the fenamic acid class affected the growth of radish roots, whilst ibuprofen had a significant influence on the early root development of lettuce plants.

Dr Clare Redshaw, one of the scientists leading the project at the Medical School’s European Centre for Environment & Human Health, said: “The huge amounts of pharmaceuticals we use ultimately end up in the environment, yet we know very little about their effects on flora and fauna. As populations age and generic medicines become readily available, pharmaceutical use will rise dramatically and it’s essential we take steps towards limiting environmental contamination. We haven’t considered the impact on human health in this study, but we need to improve our understanding quickly so that appropriate testing and controls can be put in place.”

There have been growing concerns about the presence of pharmaceuticals in the environment, particularly as evidence emerges of the effects they can have on the development of animals and antibiotic resistance in bacteria. Yet their ability to affect plant growth is poorly understood.

Lettuce roots can be damaged by Ibuprofen in the environment