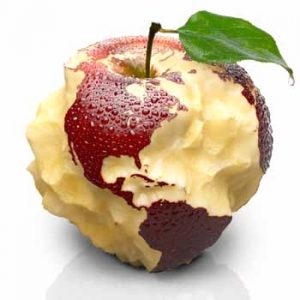 Over eating and throwing away food, on their own, waste up to a fifth of the world's food. [Photo: Bigstock]

Natural Health News — Almost 20% of the food we eat is lost through over-eating or waste alone, a new analysis suggests.

Using data collected primarily by the UN’s Food and Agriculture Organization, scientists at the University of Edinburgh found that more food is lost from the system than was previously thought.

The world population, they say, consumes around 10% food than it needs, while almost 9% is thrown away or left to spoil.

Efforts to reduce the billions of tonnes lost could improve global food security – ensuring everyone has access to a safe, affordable, nutritious diet – and help prevent damage to the environment, the team says.

» There’s more to food waste than just what we throw away.

» A new global analysis shows that the world population consumes around 10% more food than it needs, while almost 9% is thrown away or left to spoil. Both deprive others of food.

» On the production side, the researchers say that feeding livestock is the most wasteful farming of all, requiring significantly more calories from harvested crops to feed animals than are returned to us in the form of foods like meat and dairy.

The researchers examined ten key stages in the global food system – including food consumption and the growing and harvesting of crops – to put numbers to the extent of losses.

Almost half of harvested crops – or 2.1 billion tonnes – are lost through over-consumption, consumer waste and inefficiencies in production processes, researchers say.

This stage alone accounts for 40% of all losses of harvested crops, a shocking indictment of how wasteful modern livestock production is

Increased demand for some foods, particularly meat and dairy products, will decrease the efficiency of the food system and could make it difficult to feed the world’s expanding population in sustainable ways, researchers say.

Trying to meet this demand could also cause environmental harm by increasing greenhouse gas emissions, depleting water supplies and causing loss of biodiversity.

Encouraging people to eat fewer animal products, reduce waste and not exceed their nutritional needs could help to reverse these trends, the team says.

A need to improve food security

The study is published in the journal Agricultural Systems. It was carried out in collaboration with Scotland’s Rural College, University of York, Karlsruhe Institute of Technology and the Centre for Australian Weather and Climate Research.

Dr. Peter Alexander, of the University of Edinburgh’s School of GeoSciences and Scotland’s Rural College, who led the study, said: “Reducing losses from the global food system would improve food security and help prevent environmental harm. Until now, it was not known how over-eating impacts on the system. Not only is it harmful to health, we found that over-eating is bad for the environment and impairs food security.”

Professor Dominic Moran, of the University of York, who was also involved in the study, said: “This study highlights that food security has production and consumption dimensions that need to be considered when designing sustainable food systems. It also highlights that the definition of waste can mean different things to different people.”

Over eating and throwing away food, on their own, waste up to a fifth of the world's food. [Photo: Bigstock]