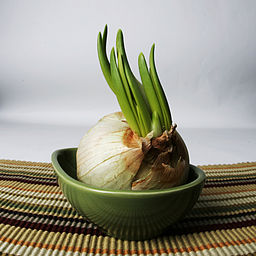 Garlic contains several beneficial compounds that can help cut the risk of diseases like cancer [Image: By Matt Frederick from USA (Flickr) via Wikimedia Commons]

Writing in the journal Cancer Prevention Research,  Scientists from the Jiangsu Provincial Center for Disease Control and Prevention in China report on their study carried out between 2003 and 2010, the aim of which was to analyse the link between raw garlic consumption and lung cancer.

The information was collected through face-to-face interviews with the participants, who were asked to answer a standard questionnaire disclosing information on diet and lifestyle habits, including how often they ate garlic and whether they smoked.

Results showed that those who consumed raw garlic on a regular basis as a part of their diet (two or more times a week), had a 44% decreased risk of developing lung cancer.

According to the authors, “Protective association between intake of raw garlic and lung cancer has been observed with a dose-response pattern, suggesting that garlic may potentially serve as a chemo-preventive agent for lung cancer.”

Protective even if you smoke…

Lung cancer is the second most common type of cancer in both men and women. Long-term smoking is the most common cause of lung cancer, accounting for 9 out of every 10 cases of the disease.

Interestingly, when the scientists looked specifically at those who smoked, they found that eating raw garlic still decreased their risk of lung cancer by around 30%.

The researchers say that the link between garlic and lung cancer prevention warrant further in-depth investigation.

In truth garlic has been widely researched. In 2006 a special edition of the Journal of Nutrition focused entirely on garlic found that it may have preventive properties against certain forms of cancer.

For example, a study from the New York Presbyterian Hospital and Weill Cornell Medical Center suggested that selenium, a compound found in garlic, may possess an anti-cancer property.

Another paper from the Medical University of South Carolina, found that organosulphur compounds found in garlic may play a part in killing brain cancer cells.

The widely used herb has also been cited as preventing and treating other ailments, such as high blood pressure, high cholesterol and diabetes.

Garlic contains several beneficial compounds that can help cut the risk of diseases like cancer [Image: By Matt Frederick from USA (Flickr) via Wikimedia Commons]