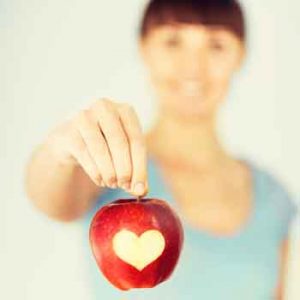 An apple a day… could save your life

Natural Health News — Prescribing an apple a day to all adults aged 50 and over would prevent or delay around 8,500 vascular deaths such as heart attacks and strokes every year in the UK.

The findings from a study published in the British Medical Journal show that this benefit is similar to giving statins to everyone over 50 years who is not already taking them.

The researchers from Oxford University and the British Heart Foundation conclude that the 150 year old public health message: “An apple a day keeps the doctor away” is able to match more widespread use of cholesterol-lowering drugs like statins, and is likely to have fewer side effects.

In the UK, lifestyle changes are the recommended first step to prevent heart disease. However, trial data suggest that statins can reduce the risk of vascular events, irrespective of a person’s underlying risk of cardiovascular disease. As such, calls are being made for greater use of statins at a population level, particularly for people aged 50 years and over.

Statins, however, are linked to a range of adverse effects such as muscle atrophy, liver damage and diabetes.

So the researchers set out to test how a 150 year old proverb might compare with the more widespread use of statins in the UK population. They analysed the effect on the most common causes of vascular mortality of prescribing either a statin a day to those not already taking one or an apple a day to everyone aged over 50 years in the UK.

The researchers assumed a 70% compliance rate (which is the percentage of people who are prescribed statins, and actually follow the prescription regimen) and that overall calorie intake remained constant.

They estimate that 5.2 million people are currently eligible for statin treatment in the UK and that 17.6 million people who are not currently taking statins would be offered them if they became recommended as a primary prevention measure for everyone over 50.

However, side-effects from statins mean that prescribing statins to everyone over the age of 50 is predicted to lead to over a thousand extra cases of muscle disease (myopathy) and over ten thousand extra diagnoses of diabetes.

But a cowardly conclusion

In spite of the findings the authors refused to be drawn on the benefits of food over drugs. They write:

“This research adds weight to calls for the increased use of drugs for primary prevention of cardiovascular disease, as well as for persevering with policies aimed at improving the nutritional quality of UK diets,” they conclude.

However lead author Dr Adam Briggs of the British Heart Foundation Health Promotion Research Group at Oxford University said: “The Victorians had it about right when they came up with their brilliantly clear and simple public health advice: “An apple a day keeps the doctor away”. It just shows how effective small changes in diet can be, and that both drugs and healthier living can make a real difference in preventing heart disease and stroke.

While no-one currently prescribed statins should replace them for apples, we could all benefit from simply eating more fruit.”