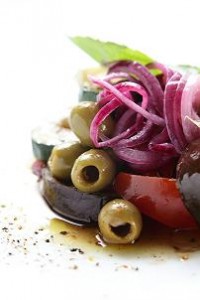 According to a new analysis of more than 50 years of data,  published in the American Journal of Medicine, people who adopt a whole diet approach – such as a Mediterranean diet – have a lower risk of heart attack and cardiovascular-related death than those who follow a strictly low-fat diet.

To reach their findings, the investigators from the University of Arizona analysed studies dating from 1957 up to the present day that looked at the relationship between food and heart disease.

The research team, including Dr. James E. Dalen of the Weil Foundation and the University of Arizona College of Medicine, notes that early studies linked high levels of serum cholesterol to higher intake of saturated fat, and in turn, increased rates of coronary heart disease.

The researchers note that a low-fat diet may lower cholesterol. But from their analysis, they found people who followed a whole diet approach, particularly the Mediterranean diet, had a greater reduction in cardiovascular death and non-fatal heart attacks than those who followed a strictly low-fat diet.

These diets did reduce cholesterol levels. However they did not reduce the incidence of myocardial infarction or coronary heart disease deaths.”

Benefits from a varied diet

The investigators say this diet incorporates foods that are low in saturated fat, but it also encourages intake of monounsaturated fats that are known to lower cholesterol.

They add that their findings show consuming a variety of cardioprotective foods in a diet is better at preventing heart disease than a standard low-fat diet.

“The last fifty years of epidemiology and clinical trials have established a clear link between diet, atherosclerosis, and cardiovascular events,” says Dr. Dalen.

“Nutritional interventions have proven that a ‘whole diet’ approach with equal attention to what is consumed as well as what is excluded is more effective in preventing cardiovascular disease than low-fat, low-cholesterol diets.”

For those who don’t live in Mediterranean countries other types of diet which focus on whole fresh seasonal foods, such as the Nordic diet, may have similar benefits.