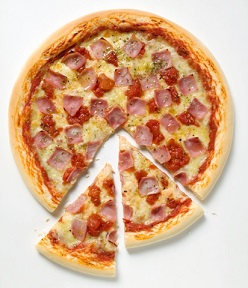 Natural Health News — An expose in a British newspaper has revealed that consumers are being sold drinks containing banned flame-retardant additives, ‘pork’ made of chicken, and fake cheese.

Laboratory tests on 900 different food item by West Yorkshire council have shown that 38% of foods were not what they claimed to be, or were mislabelled in some way.

The testing, the results of which were published today in the Guardian newspaper,  turned up mozzarella that is less than half real cheese, ham on pizzas that is either poultry or “meat emulsion”, and frozen prawns that are 50% water, beef mince adulterated with pork or poultry, vitamins that made health claims that are not allowed under legislation.

They even found a herbal slimming tea that was neither herb nor tea but glucose powder laced with a withdrawn prescription drug for obesity at 13 times the normal dose.

In addition, a third of fruit juices sampled were not what they claimed or had labelling errors. Two contained additives that are not permitted in the EU, including brominated vegetable oil, which is designed for use in flame retardants and linked to behavioural problems in rats at high doses. Vitamins that made health claims that are not allowed under legislation were also found.

Counterfeit vodka was also uncovered. In one case, tests revealed that the “vodka” had been made not from alcohol derived from agricultural produce, as required, but from isopropanol, used in antifreeze and as an industrial solvent.

West Yorkshire’s public analyst, Dr Duncan Campbell, said his labs were “routinely finding problems” with sampled foods and the findings of this survey were likely representative of the picture nationally in the UK,

The findings come at a time when the budget for food standards inspection and analysis is being cut. They also come hot on the heels of the UK’s horsemeat scandal.

Testing food is the responsibility of local authorities and their trading standards departments, but as their budgets have been cut many councils have reduced checks or stopped collecting samples altogether.

The number of samples taken, to test whether food being sold matched what was claimed, fell nationally by nearly 7% between 2012 and 2013, and had fallen by over 18% in the year before that. About 10% of local authorities did no compositional sampling at all last year, according to the consumer watchdog Which?.

West Yorkshire is one of a very few councils that retains a public laboratory and maintains routine testing. In this latest round of tests, food samples are anonymised to prevent bias, so the researchers were unable to see who had made or sold individual products.

Many of the samples were collected from fast-food restaurants, independent retailers and wholesalers; some were from larger stores and manufacturers. As such it is likely the results reflect what is happening on a national scale throughout the UK.

Not just in the UK

The scandal of fake food is becoming an international problem as manufacturers cut corners to increase profit margins.

Last year a scientific examination by the non-profit food fraud detectives the US Pharmacopeial Convention (USP), discovered rising numbers of fake ingredients in products from olive oil to spices to fruit juice as part of its ongoing efforts to maintain a Food Fraud Database.

Among the most popular targets for unscrupulous food suppliers were:

Indeed seafood mislabelling is widely recognised as an ongoing problem. Milk, honey, coffee and syrup are also listed by the USP as being highly adulterated products.

And, of course, these stories don’t even touch on those foods that are intentionally, even proudly, fake, which some manufacturers believe is the future of food.

While the West Yorkshire scientists don’t go so far as to publicly suggest that the manufacturers deliberately lied on their food labels, the increasing frequency with which we are finding that the product in the box, or in the bottle, is not what it says it is, is a sobering reminder that labelling doesn’t solve every food problem and can be as misleading for what it reveals, as for what it doesn’t.

GM contamination, for example, routinely found in the food supply. In 1998 a type of GM maize, known as Starlink, which was not approved for human consumption was found in food destined for consumption by humans in the US, Japan, and South Korea. It was subsequently discovered in Taco Bell-branded taco shells sold in supermarkets across the US.

Although StarLink was withdrawn from sale in 2001, in 2005 aid sent by the UN and the US to Central American nations also contained some StarLink corn. The nations involved, Nicaragua, Honduras, El Salvador and Guatemala refused to accept the aid. In 2013 StarLink corn was reported to be found contaminating some foods in Saudi Arabia.

Unapproved GM rice has been found in baby food in China

Unauthorised GM papaya from Thailand has been found in Switzerland, as well as France, Austria, Germany and elsewhere.

It is worth considering whether labelling would have stopped such contamination any more than it stopped contaminated vodka or fake cheese from being consumed.

Manufacturers of processed foods say they are only supplying what the public wants at the price the public demands. But these foods and their dodgy ingredients carry a high, though often ignored, price in terms of health.

As we find, again and again, that processed foods are vulnerable to contamination, deliberate or otherwise, and plagued with misleading label information, it’s worth asking the question, whether a shift in consumer values could change the marketplace and whether it would be simpler – and safer – to just stop eating them altogether?