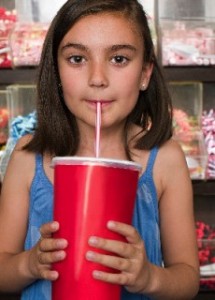 Natural Health News — Girls who frequently consume sugary drinks tend to start their menstrual periods earlier than girls who do not, according to new research.

In the first study to look at the relation between sugar-sweetened drinks and the age at which girls have their first period, researchers followed 5583 girls, aged 9-14 years between 1996 and 2001.

The findings published in the journal Human Reproduction, are important not only because of the growing problem of childhood obesity in a number of developed countries, but also because starting periods earlier is linked to an increased risk of breast cancer later in life.

In the paper, the authors conclude: “Our findings suggest that frequent consumption of SSBs [sugar-sweetened beverages] may be associated with earlier menarche…The amount of SSBs consumed by girls in our highest category of consumption, more than 1.5 servings per day, however, is likely low compared with consumption in certain other populations, in which we would expect an even more dramatic decrease in age at menarche…Most importantly, the public health significance of SSB consumption at age at menarche, and possibly breast cancer, should not be over-looked, since, unlike most other predictors of menarche, SSB consumption can be modified.”

The researchers also investigated diet sodas and fruit juice to assess the impact of artificially or naturally sweetened drinks, but these were not associated with any difference in the age at which girls started their periods.

The girls in the study were part of the Growing up Today Study, which follows 16,875 children of Nurses’ Health Study II participants living in all 50 states of the USA. At the time of joining the study none of the girls had started their periods; by the end of the study all but 3% (159) had started menstruation.

The researchers used questionnaires to ask the girls about their diet at several points during the study, including how frequently, on average, they drank a serving of different types of drinks: one can or glass of soda or diet soda (soda being carbonated drinks such as colas), one glass of non-carbonated fruit drinks (fruit mixes such as lemonade, punch and other non-carbonated fruit drinks), or one glass, can or bottle of sweetened ice tea.

All of these drinks have sugar added to them in the form of sucrose, glucose, corn syrup etc, while the colas and iced tea also contain caffeine. The researchers also investigated diet sodas and fruit juice to assess the impact of artificially or naturally sweetened drinks, but these were not associated with any difference in the age at which girls started their periods.

At any age between nine and 18.5 years, girls who reported consuming more than 1.5 servings of sugar-sweetened drinks a day were, on average, 24% more likely to start their first period in the next month relative to girls consuming two or fewer servings a week, taking into account factors that could affect the age of first menstruation, such as birth weight, physical activity, race or ethnicity, height, frequency of eating dinner together as a family, and family composition (whether or not a father or step-father lived at home).

The average age of the first period among girls consuming the most sugary drinks was 12.8 years, compared to 13 years for those drinking the least.

When the researchers adjusted their results to take account of BMI, the effect of sugary drink consumption on the age of onset of menstruation was still significant: girls consuming the most were 22% more likely to start their first period in the next month compared to girls consuming the least.

Caffeine a risk too

Greater caffeine intake has also been associated with earlier periods. However, the researchers found that total sugar or caffeine intake did not explain their results, and that it was the added sugar in drinks such as sodas that was the culprit. Greater BMI only partially explained the results and was not the main mediator.

Karin Michels (ScD, PhD), Associate Professor at Harvard Medical School (Boston, USA), who led the research, notes: “These findings are important in the context of earlier puberty onset among girls, which has been observed in developed countries and for which the reason is largely unknown…[they] provide further support for public health efforts to reduce the consumption of sugary drinks.”