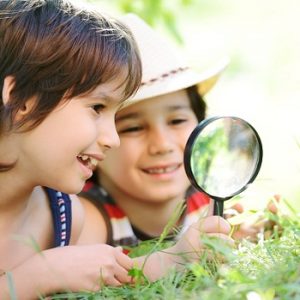 Children should get at least 15 hours of outdoor play each week to protect their eyesight. [Photo: Bigstock]

Get kids outdoors to prevent nearsightedness

Natural Health News — Kids who spend more time outdoors and who play sports are less likely to be near-sighted, according to a recent study.

Nearsightedness is more common today in the United States and many other countries than it was in the 1970s. Last year a major study predicted that by 2050 half the world’s population will be nearsighted. Understanding what is causing it and finding ways to prevent it, therefore, are crucial.

“Lifestyle in early youth is very much associated with onset of myopia,” said Dr. Caroline Slaver of Erasmus Medical Center in Rotterdam in an interview with the Reuters news agency. “Not being outside, and performing lots of near work will increase risk a lot.”

The researchers looked at 5,711 children in Rotterdam who have been participating since birth, along with their mothers, in a long-term study. At age 6, the children had a full medical examination and 2.4% were found to have myopia, or nearsightedness.

» Myopia, or nearsightedness, is a growing problem, particularity in the developing world.

» It can develop early in life and for years the early development of myopia has been broadly linked to ethic origin and socioeconomic status.

» A new study however suggests that how children spend their time is more influential; myopic children spent less time outdoors, had lower levels of vitamin D, had a higher body mass index and were less likely to play sports than children who weren’t nearsighted.

» The researchers recommend that children should get at least 15 hours a week of playtime outdoors to reduce the risk of nearsightedness .

The study, published in the British Journal of Ophthalmology, found that myopic children spent less time outdoors, had lower levels of vitamin D, had a higher body mass index and were less likely to play sports than children who weren’t nearsighted. While being of non-European descent, having a mother with a low education level and low family income were also associated with myopia, it was these lifestyle factors that explained most of these risks.

Klaver and colleagues findings adds to growing body of research about the eye benefits of time outdoors.

A study of Danish children, was the first to show that the rate of eye growth varies in relation to exposure to daylight. This is important, because if the eye grows too long, as measured from front to back, the child will be nearsighted. The children’s eyes grew normally during the long days of summer in Denmark, but grew too fast during the short days of winter.

One analysis of several studies showed that for each additional hour children spent outdoors per week, their risk of being nearsighted dropped by about two percent. Nearsighted children in this study spent on average 3.7 fewer hours per week outdoors than those who either had normal vision or were farsighted. The study investigated whether children who logged more outdoor time also spent less time performing near work, such as playing computer games or studying, but no such relationship was found.

In another study the addition of a daily outdoor activity class at school for three years for children in Guangzhou, China, resulted in an overall 23% reduction in the rate of nearsightedness.

Klaver’s study found that the preventative effect of time outdoors is beneficial even at very young ages, e.g. 3 – 6 years-old. Too much close work, such as reading and using hand-held devices, may also be influential though this study did not look at this issue.

To help prevent myopia, Klaver said, parents should have children play outside for 15 hours a week, and limit “near work” to no longer than 45 continuous minutes.

Children should get at least 15 hours of outdoor play each week to protect their eyesight. [Photo: Bigstock]