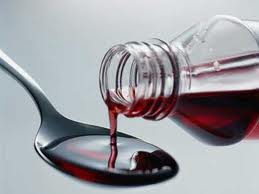 Why are additives linked to hyperactivity still in children’s medicines?

Natural Health News — Some of the UK’s leading children’s medicines contain colourings withdrawn from food and drink because of risks to hyperactivity and ADHD in children.

A new report, by the group Action on Additives, shows that 52 children’s medicines surveyed contain at least one and sometimes two or three of the seven E-number ingredients known as the ‘Southampton Seven Additives’.

These ingredients are seven additives with proven links to hyperactivity in a scientific study carried out by Southampton University and commissioned by the Food Standards Agency (FSA) in 2007.

The 2007 study built on findings of a 2004 study, carried out by the same team at Southampton.

Food manufacturers have removed most of the colourings from hundreds of snacks, sweets and other products, after the FSA called for a voluntary ban in 2008.

They remain in children’s medicines however, even though in June this year, the European Food Standards Agency called for five of these colourings (all but Quinoline Yellow, E104) to be tested for genotoxicity – that is the ability of a substance to cause damage to DNA, the genetic material of our cells.

The report names and shames several popular brands of children’s medicines and has revealed that:

The manufacturers, including Boots and Johnson & Johnson, have stated that they felt that the additives are safe. 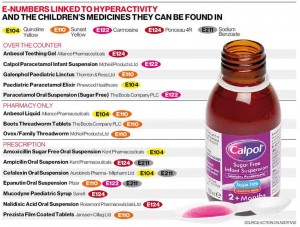 However, medicines are subject to different, weaker regulations to food and drink.

Synthetic colourings are banned from food and drinks targeted specifically at children under 36 months under the EU ‘Weaning Directive’  because children’s developing physiology places them in a special risk group in relation to the ingestion of additives.

Yet, even medicines for children as young as 2 months contain colourings and preservatives that are banned from their food.

Parents need to be better informed

In July 2013, MHRA stated that it is committed to encouraging manufacturers to remove the colourings identified. But the Agency said it was unable to enforce a ban without further EU regulation.

In fact, the European Union issued its own guidance on the use of ‘colouring agents’ used in paediatric medicines, advising that special care is needed when formulating medicines for children. It highlights that the known risk of, for example, azo dyes, should be taken into consideration.

To alert parents to the research, Action on Additives have published A Parent’s Guide to Additives in Children’s Medicines which is now available.

Action on Additives recommends that these additives should be banned and not simply ‘recommended for withdrawal’ or phased out in children’s medicines as they are in food and drink .

The group encourages parents and carers to learn more and to request additive free medicines. It is also important that parents report any adverse reactions to the Medicines and Healthcare Products Regulatory Agency (MHRA). This can be done online via the ‘Yellow Card’ scheme or pick up a leaflet at your local pharmacy.