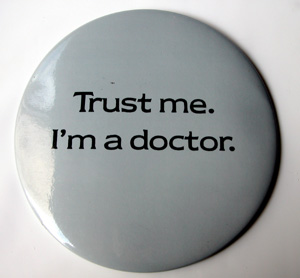 How much trust should we put in doctors who don't understand environmental illness?

Researchers at the University of Haifa International School in Jerusalem surveyed 25 universities – 10 in United States, 10 in Europe and five in Israel – and found only six environmental health courses offered in clinical medicine programs.

A sixth, at Bar-Ilan University in Ramat Gan, was a required course, where the school “educated clinical physicians about environmental concerns, stating that its ‘curriculum will focus not only on patient care, but also on healthy lifestyles, with specific regard to environmental factors.’”

While most of these universities have environmental studies courses within their institutions, they do not incorporate these courses in their medical school curricula.

The resulting report, called “Our Health and Environment,” was written by Stephanie Rieger, a coalition fellow at the University of Haifa International School.It is not yet available to the public, but it’s findings have been reported in Israel.

“Our primary care physicians, no matter what area of the world they are attending, place little emphasis on environmental toxicology in regards to their core and elective courses,” wrote the reports author Stephanie Rieger in a summary editorial printed alongside the study.

She said the findings demonstrate that the globe’s primary care physicians require “a more comprehensive education in respect to environmental health,” especially since environmental concerns are escalating as of late.

In the report, Rieger emphasises how dangerous contaminated soil, dust or water can be, and explains how humans can easily absorb many of these same toxins while they are suspended in the air.

This air contamination can have short-term impacts, such as headaches, nausea, bronchitis and pneumonia, but can also cause long-term problems, like chronic respiratory disease, lung cancer, heart disease and brain and neural damage.

“As human beings continue to have momentous impacts on the environment and its resources, core education seems to be the best device for providing the public with medical professionals that understand the ramifications human actions and behaviour patterns that influence their health and environment,” Rieger wrote.

“Since exposure to air pollutants are largely beyond the control of individuals and requires action by public authorities at the national, regional and even international levels, it is imperative to educate our primary care physicians and health workers about this imminent risk to make certain that when medical attention is needed, it is delivered in an efficient and accurate manner.”

Illnesses caused by environmental factors are often misdiagnosed because it is sometimes difficult to determine which pollutants are causing symptoms and isolate the culprits, the report argues. Therefore, it is crucial, says Rieger, to supply primary health providers with the comprehensive knowledge necessary to be able to make as accurate diagnoses as possible.

She suggests that medical schools throughout the world lacking environmental health programs should use the select programs that do exist as models for developing their own. More advocacy for funding to public medical schools is also crucial. While most of these universities have environmental studies courses within their institutions, they do not incorporate these courses in their medical school curricula.

“The public relies on primary care physicians to improve their health and well-being” said Rieger in her report “it should be of the utmost importance that the education of these individuals is all-encompassing”.

How much trust should we put in doctors who don't understand environmental illness?