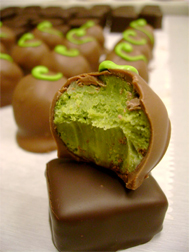 Current drug therapy for patients with HIV is unable to control the complete replication of the virus in the brain.

Because of this conventional drugs cannot protect sufferers from the degenerative neurological complications associated with the disease.

New research from Johns Hopkins University however has discovered that a group of plant polyphenols known as catechins, which naturally occur in green tea and the seed of the cacao tree, may help in the prevention of these neurological complications. Their work is published online in the Journal of NeuroVirology.

Previous research has established the critical role of a protein called brain-derived neurotrophic factor (BDNF) in supporting the survival and growth of neurons in the brain.

This protein is active in areas of the brain vital to learning, memory and higher thinking. Patients with HIV have been found to have lower levels of BDNF in their brains than healthy individuals suggesting that this could be directly responsible for the cognitive impairment suffered.

In an investigation into around 2000 compounds, containing both natural substances and FDA-approved drugs, on brain cells in the laboratory the researchers identified a series of compounds which had the potential to help protect neurons in the brain.

Nine of these were related to epicatechin, which is found in cocoa and green tea leaves. Further screening and comparison with resveratrol, the antioxidant found in red wine, specifically identified epicatechin and epigallocatechin gallate (EGCG) as being the most effective at helping protect neurons by inducing production of BDNF.

Although the antioxidant activities of epicatechin and EGCG are well documented, the discovery that they could be responsible for inducing production of BDNF is a real advancement in this area.

The fact that these compounds readily cross the blood-brain barrier further increases their therapeutic potential, as this is often a major stumbling block in the development of therapies directed at the brain.

The authors conclude: “Due to its simpler structure and more efficient blood-brain barrier penetration properties, epicatechin might be the best therapeutic candidate for neurodegenerative diseases. These include HIV-associated cognitive disorders where oxidative stress is an important pathophysiological mechanism.” Further research in patients with HIV is required to elucidate just how effective these naturally occurring compounds could be.