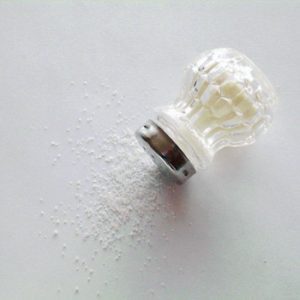 Salt interacts with common bacteria in the gut with implications for the development of not only hypertension but certain autoimmune diseases as well. [Photo: Garitzko, via Wikimedsia Commons]

Big implications for how salt interacts with gut bacteria

Natural Health News — We eat salt every day, sometimes more, sometimes less, but often too much. Now researchers have found that excess dietary salt interacts with common bacteria in the gut with implications for some serious health conditions.

While we all need salt to live, this study in both animals and humans found that common salt reduces the number of certain lactic acid bacteria in the gut, and that this, in turn, has an impact on immune cells which are partly responsible for autoimmune diseases like multiple sclerosis (MS) and for hypertension.

But according to head of the study Professor Dominik Müller of the Berlin Experimental and Clinical Research Center (ECRC) and the Berlin Institute of Health (BIH), “so far, nobody had studied how salt affects the bacteria in the gut.”

Offsetting the effects of excess salt

» German scientists investigating the effect of excess salt on the microbiome have found that it can be detrimental to lactic acid bacteria which function in tandem with the immune system.

» Studying both humans and animals, the research team found that, through the gut bacteria, excess dietary salt not only raises blood pressure but also increases and immune response seen in autoimmune diseases such as multiple sclerosis.

» Taking probiotic supplements helped to return blood pressure and immune response to normal and, the researchers suggest, may be a useful addition to standard immune therapies.

Writing recently in the journal Nature, Müller and his team have demonstrated that excess salt decimates the lactobacilli in the gut and at the same time blood pressure rises and the number of what are known as Th17 helper cells is increased. High levels of these immune cells are associated with hypertension and autoimmune diseases like MS.

However, when the animals were given probiotic lactobacilli in addition to the high-salt diet, the number of TH17 helper cells decreased once again and blood pressure dropped. The probiotics also alleviated the clinical symptoms of experimental autoimmune encephalomyelitis (a type of induced brain inflammation, similar to that in MS), in the animals.

What this means is that the microbiome could be an important factor in salt-sensitive diseases, such as MS. Lead author and ECRC scientist Dr Nicola Wilck says, “Gut bacteria influence the host organism, and the immune system is also very active in the gut.”

Apart from the experiments on mice, the researchers also investigated the bacterial community in the digestive tract of twelve healthy men who were given six extra grams of salt every day for a fortnight. As the men otherwise maintained their usual eating habits, they thus roughly doubled their daily intake of salt.

Here, too, the lactobacilli proved to be sensitive to the extra salt with most of them no longer detectable after 14 days of increased salt intake. Once again the scientists found that as salt intake increased blood pressure rose and the number of Th17 helper cells in the blood increased.

The role played by bacteria in diverse diseases is becoming an ever more important focus of research.

Just how the body interacts with gut flora is, however, still largely unknown and the researchers say they can’t exclude the possibility that there are other salt-sensitive bacteria that are just as important as lactobacilli.

Lactic acid bacteria are found in fermented food such as pickled cucumbers, sauerkraut, yogurt and cheese. While the study was no designed to show if eating these foods protected against hypertension or autoimmune disease, it is known that including more of these in the diet can help maintain communities of these bacteria in the gut. What is more, lactobacillus probiotics of this kind have been shown to have therapeutic potential.

Neuroimmunologist Professor Ralf Linker another of the study’s authors, notes, “Multiple sclerosis may be one of the salt-sensitive diseases which we might be able to treat in the future with individually-tailored probiotics as add-on to standard immune therapies.”

Salt interacts with common bacteria in the gut with implications for the development of not only hypertension but certain autoimmune diseases as well. [Photo: Garitzko, via Wikimedsia Commons]