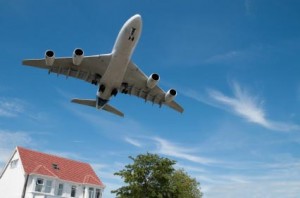 Natural Health News — Aircraft noise generated around major airports has been linked to linked to higher risk of hospital admissions and death from heart disease and stroke according to a two new studies.

In the first study, researchers at Imperial College London and King’s College London compared data on day- and night-time aircraft noise with hospital admissions and mortality rates among a population of 3.6 million people living near London’s Heathrow airport.

The study published in the British Medical Journal (BMJ) covered 12 London boroughs and nine districts outside of London where aircraft noise exceeds 50 decibels – about the volume of a normal conversation in a quiet room. It found that the risks were around 10 to 20% higher in areas with highest levels of aircraft noise compared with the areas with least noise.

Professor Paul Elliott, the senior author of the study and director of the UK Small Area Health Statistics Unit and MRC-PHE Centre for Environment and Health where the study was conducted, said:

“It’s worth bearing in mind that there are many other factors that are known to have important influences on an individual’s risk of heart disease and stroke, such as diet, smoking, lack of exercise and medical conditions such as raised blood pressure and diabetes. However, our study does raise important questions about the potential role of noise on cardiovascular health, which needs further study.”

The research – which claims to be the first to analyse a very large population across multiple airports – found that, on average, zip codes (post codes) with 10 decibel (dB) higher aircraft noise had a 3.5% higher cardiovascular hospital admission rate.

Those exposed to the highest noise levels – more than 55 dB – had the strongest link with hospitalisations for heart disease, and the link also remained after adjustment for socioeconomic status, demographic factors, air pollution, and proximity to roads.

Both studies called for more research to establish whether there is any link between airplane noise and poor cardiovascular health, but in truth these studies do not represent the first time that studies have linked increased air traffic noise with health concerns.

As far back as 1998 researchers found that the constant roar from jet aircraft can seriously affect the health and psychological well-being of children. Cornell University researchers concluded that the health problems resulting from chronic airport noise, including higher blood pressure and boosted levels of stress hormones, the researchers say, may have lifelong effects.

In a small 2007 study scientists from Imperial College London and other European institutions monitored 140 sleeping volunteers in their homes near London Heathrow and three other major European airports. Night-time noise from aircraft or traffic was shown to increase a person’s blood pressure even if it does not wake them.

In a larger 2009 European study involving nearly 5000 people women were found to be particularly sensitive to aircraft noise. In this study women, but not men, who were exposed to regular aircraft noise had increased morning saliva levels of the stress hormone cortisol, which the researchers said could lead to cardiovascular effects.

It’s not just planes that are the problem. According to a 1999 report by the World Health Organization transportation noise is a significant and increasing health problem in urban areas worldwide; and there’s plenty of evidence to show these increasing levels of noise harm our health.

Living in close proximity to road traffic can, for example, raise the risk of hypertension.

In 2009 Swedish researchers reporting in the journal Epidemiology found that people living in environments with high levels of road traffic noise might be more likely to suffer heart attacks than people in quieter areas.

A 2011 study published online in the European Heart Journal found that exposure to noise from road traffic can increase the risk of stroke, particularly in those aged 65 years and over

These are just a handful of the studies in this area showing the negative effects of transportation noise on health – and this is before we even get to the health problems created by transportation pollution.

A fight or flight response

At heart is the stress created by loud noises. This triggers our innate  fight-or-flight response: The heart beats faster and harder, blood pressure rises, and the body releases stress hormones including adrenaline and cortisol. High levels of stress hormones can have a devastating effect on health in a multitude of ways including accelerating the ageing process, depressing immunity, raising levels of inflammation and as these studies have shown, increasing the risk of serious diseases and death.

Stress busting activities like meditation can help, but as with so many environmental problems, awareness of the impact of noise needs to be more widespread – not just amongst average people, but amongst doctors and politicians – before effective solutions can be put into place.