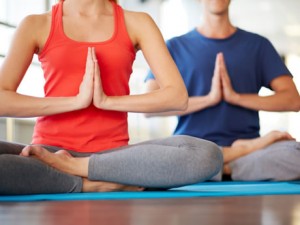 Yoga, an ancient mind-body practice, has been shown to reduce the risk of heart attacks and strokes

Natural Health News — There is promising evidence that practising yoga is an effective way to manage and improve the risk factors associated with cardiovascular disease.

Yoga, an ancient mind-body practice which originated in India and incorporates physical, mental, and spiritual elements, has been shown in several studies to be effective in improving cardiovascular risk factors, with reduction in the risk of heart attacks and strokes.

In the current study investigators from the Netherlands and the US performed a review of 37 randomised controlled trials (which included 2768 subjects) in order to appraise the evidence and provide a realistic pooled estimate of yoga’s effectiveness when measured against exercise and no exercise.

Results showed that yoga may provide the same benefits in risk factor reduction as such traditional physical activities as biking or brisk walking.

“This finding is significant as individuals who cannot or prefer not to perform traditional aerobic exercise might still achieve similar benefits in [cardiovascular] risk reduction.”they note in the European Journal of Preventive Cardiology.

Looking at the result in depth, it was found that risk factors for cardiovascular disease improved more in those doing yoga than in those doing no exercise, and second, that yoga had an effect on these risks comparable to exercise.

Improves the effectiveness of medication

In comparisons with exercise itself, yoga was found to have comparable effects on risk factors as aerobic exercise. The investigators note that this might be because of yoga’s impact on stress reduction, “leading to positive impacts on neuroendocrine status, metabolic and cardio-vagal function.”

The similarity of yoga and exercise’s effect on cardiovascular risk factors, say the investigators, “suggest that there could be comparable working mechanisms, with some possible physiological aerobic benefits occurring with yoga practice, and some stress-reducing, relaxation effect occurring with aerobic exercise.”

Moreover, in view of yoga’s ease of uptake, the investigators also note that evidence supports yoga’s acceptability to “patients with lower physical tolerance like those with pre-existing cardiac conditions, the elderly, or those with musculoskeletal or joint pain.”

Thus, they conclude that “yoga has the potential to be a cost-effective treatment and prevention strategy given its low cost, lack of expensive equipment or technology, potential greater adherence and health-related quality of life improvements, and possible accessibility to larger segments of the population.”

Yoga, an ancient mind-body practice, has been shown to reduce the risk of heart attacks and strokes