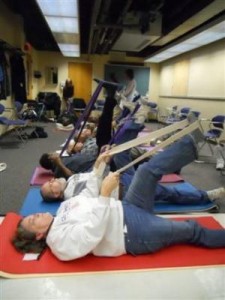 Balance problems frequently last long after a person suffers a stroke, and are related to greater disability and a higher risk of falls.

In a small pilot study, published in the American Heart Association journal Stroke, researchers tested the potential benefits of yoga among chronic stroke survivors – those whose stroke occurred more than six months earlier.

The study’s 47 participants, about three-quarters of whom were male veterans, were divided into three groups: twice-weekly group yoga for eight weeks; a “yoga-plus” group, which met twice weekly and had a relaxation recording to use at least three times a week; and a usual medical care group that did no rehabilitation.

The yoga classes, taught by a registered yoga therapist, included modified yoga postures, relaxation, and meditation. Classes grew more challenging each week. The oldest patient in the study was in his 90s. All participants had to be able to stand on their own at the beginning of the study.

Compared with patients in the usual-care group, those who completed yoga or yoga-plus significantly improved their balance.

Because of this, improvements after the first six-months tend to be slow or tail off entirely.

“But,” said Schmidt “we know for a fact that the brain still can change. The problem is the healthcare system is not necessarily willing to pay for that change. The study demonstrated that with some assistance, even chronic stroke patients with significant paralysis on one side can manage to do modified yoga poses.”

Researchers also noticed improvements in the mindset of patients about their disability. Survivors in the yoga groups had improved scores for independence and quality of life and were less afraid of falling.The participants talked about walking through a grocery store instead of using an mobility scooters, being able to take a shower and feeling inspired to visit friends.

“It has to do with the confidence of being more mobile,” Schmid said, adding that although these changes took time to unfold, “these were very meaningful changes in life for people.”

Yoga may be more therapeutic than traditional exercise because the combination of postures, breathing and meditation may produce different effects than simple exercise, researchers said.

“However, stroke patients looking for such help might have a hard time finding qualified yoga therapists to work with,” Schmid said. “Some occupational and physical therapists are integrating yoga into their practice, even though there’s scant evidence at this point to support its effectiveness.”

Researchers say they can draw only limited conclusions from the study because of its small number of participants and lack of diversity, and that more research is needed.  It’s a claim since

In fact there have been several small studies into the benefits of yoga in rehabilitating stroke victims.

That means, however, that in 8 years only 77 people have been involved in trials exploring yoga for stroke recovery. In spite of the positive results, money for stoke research, like so much health research, flows towards drugs and technology – ‘cures’ that create dependency rather than independence. So the researchers are right,  more research is needed – but frustratingly the will to produce that research seems sorely lacking.