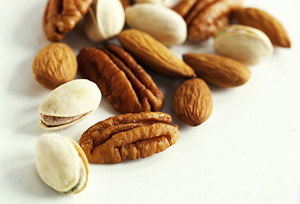 Nuts, such as walnuts and pistachios, are among the foods that can hep lower blood pressure

High blood pressure is known as the  ‘silent killer’ because it generally has no symptoms but if left unchecked can lead to heart disease and stroke.

Treating it is always tricky. Doctors generally prescribe a laundry list of drugs including diuretics, beta blockers, calcium channel blockers, though these don’t always produce the intended results and they can produce debilitating adverse effects.

Here at Natural Health News we’re always on the lookout for alternatives that work. So it was great to see the latest issue of the journal Food Technology highlight six foods that have been shown in studies to have a beneficial effect on lowering blood pressure. Here’s a summary of some of the evidence.

Dairy foods
While additional research is still being conducted, several studies have showed that a diet with more dairy and nuts, but less meat, is related to a lower risk of developing hypertension, and associated with having lower systolic blood pressure.

Nuts, such as walnuts and pistachios, are among the foods that can hep lower blood pressure