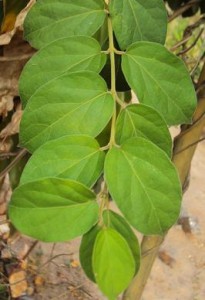 Gymnema slyvestre is a tropical vine plant found in India, China and Australia.

Natural Health News — A herb native to the tropical forests of southern and central India and Sri Lanka could be a breakthrough treatment for a common human fungal pathogen that lives in almost 80% of us.

He decided to study the microbiological use of G. slyvestre to see if it could treat a common human fungal pathogen called Candida albicans.

The investigation was successful in two ways: the medicinal compound was found to be both nontoxic as well as having the ability to block the virulence properties of the fungus making it more treatable.

“We have shown that this compound is safe to use because it doesn’t hurt our body cells, yet it blocks the virulence of this fungus under in vitro conditions,” Vediyappan said. “Taking the medicine could potentially help patients control the invasive growth of the fungus and also help bring their sugar levels down.”

Candida albicans is one of the major fungal pathogens in humans because it lives in oral and intestinal areas as a normal flora. But the fungus can overgrow and can cause oral, intestinal and genital infections.

Candida can kill almost 30% of people who have it and it is a concern among cancer patients – especially patients with neck or oral cancer – HIV patients, organ transplant patients and other people with compromised immune systems.

The fungus can grow in two forms: a treatable yeast and a difficult-to-treat hyphal form. Once the fungus transforms from a yeast to a hyphal growth it becomes difficult to treat because the hyphal growth has long filament-like structures that can spread into various organs. Vediyappan’s study aimed to block the hyphal growth form.

“Once it gets into the tissue, it spreads like roots and is difficult to contain by our immune system,” Vediyappan said.

The Candida albicans fungus also makes a biofilm, which is a fungal cell collection that can be difficult to treat. The researchers found that the gymnemic acid compounds converted the biofilm back to treatable yeast cells.

“This compound prevents the biofilm formation because hyphae are the major builders of biofilms and biofilms are resistant to antifungals,” Vediyappan said. “Yeast cells by themselves cannot make biofilms and are sensitive to antifungal treatments.”

The current study which appears in the peer-reviewed journal PLOS ONE  also found another interesting aspect: The gymnemic acid compounds also stopped the growth of Aspergillus, another fungal pathogen that can affect heart transplant patients and leukaemia patients.

A beneficial plant for diabetics too

Historically, the leaves of G. slyvestre were used for stomach ailments, constipation, water retention, and liver disease. More recently lab oratory studies have shown that extracts of the plant may be useful as therapeutic agents for the stimulation of insulin secretion in individuals with type 2 diabetes.

The rise in insulin levels may be due to regeneration of the cells in the pancreas.  Animal studies have shown that G. sylvestre can also help prevent adrenal hormones from stimulating the liver to produce glucose, thereby reducing blood sugar levels.

Gymnema slyvestre is a tropical vine plant found in India, China and Australia.