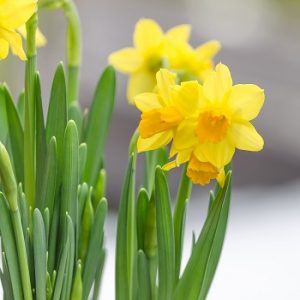 Daffodils contain the alkaloid hemanthamine (HAE) which has a strong physiological - and possibly anti-cancer - effect in humans. [Photo: Bigstock]

Natural Health News — New research has shown that a natural alkaloid extracted from daffodils activates anti-tumour pathways in the body.

It’s too soon to say whether daffodils could cure cancer, but the study from the Faculty of Sciences at the Université Libre de Bruxelles (ULB) in Belgium, offers some intriguing possibilities for how yet another cure from nature could help fight the disease.

Published recently in the journal Structure, the researchers reveal how they extracted a natural anti-cancer compound from daffodils (Amaryllidaceae narcissus).

» Belgian researchers have discovered that daffodils contain a potent alkaloid that could help fight cancer.

» Haemanthamine (HAE) activates anti-tumour pathways in the body that are responsible for slowing the growth of cancer cells.

» More study is needed but the researchers note that HAE belongs to the same family as other plant-derived alkaloids including morphine, a potent pain killer, as well as quinine, used against malaria and ephedrine, used in the treatment of asthma.

Amaryllidaceae plants are among the 20 “most widely considered medicinal plant families”, due to their pharmacologically active compounds, say the researchers.

They established that this compound, an alkaloid named haemanthamine (HAE), binds to what is called the ribosome. Ribosomes are ‘nanomachines’ essential to the survival of our cells because they synthesise all our proteins. To sustain their unrestrained growth, cancer cells rely on increased protein synthesis: they are therefore particularly sensitive to treatments that inhibit the production and the function of ribosomes.

Their study goes some way into the mechanism by which a daffodil extract might work to slow cancer. It shows that haemanthamine blocks the production of protein by ribosomes, thus slowing growth of cancer cells. Haemanthamine also inhibits the production of these nanomachines in the nucleolus – the body’s “ribosome factory”. This in turn triggers the activation of an anti-tumour surveillance pathway leading to the stabilisation of the protein p53 and to the elimination of cancer cells.

This study provides for the first time a molecular explanation to the anti-tumour activity of daffodils used for centuries in folk medicine.

Writing more about Amaryllidaceae alkaloids, the study authors note that the biological activities of extracts from this family are not restricted to anticancer effects.  Morphine, a potent pain killer, as well as quinine (which is used against malaria) and ephedrine (used in the treatment of asthma) are all part of the same family as HAE.

In a near future, the Belgian researchers hope to test the effect on ribosome production and function of four more Amaryllidaceae alkaloids, representative of the chemical diversity of these molecules. Their goal will be to identify rapidly the most promising chemical backbone to be further developed as a lead compound in cancer therapeutics.

Daffodils contain the alkaloid hemanthamine (HAE) which has a strong physiological - and possibly anti-cancer - effect in humans. [Photo: Bigstock]